Often on this site (and other forums for 3D printing news) the focus lies solely on 3D printing (with good reason, it’s all in the name), but this story, while not digressing very far, presents a very interesting visual comparison between old world technology and the future we have already reached. Jose Delgado Jr. has long been familiar with prosthetics since he was born missing a severe amount of his left hand. One of his most recent models, a myoelectric prosthesis, cost thousands of dollars and affords him a weak grip powered by his forearm muscles. 3D printing on the other hand offered a prosthetic with a seemingly comic book, superhero inspired name, the Cyborg Beast. With a total cost of $50 for the prosthetic (printer sold separately) Delgado’s new 3D printed prosthetic hand proved more functional and stronger than his latest myoelectric hand. 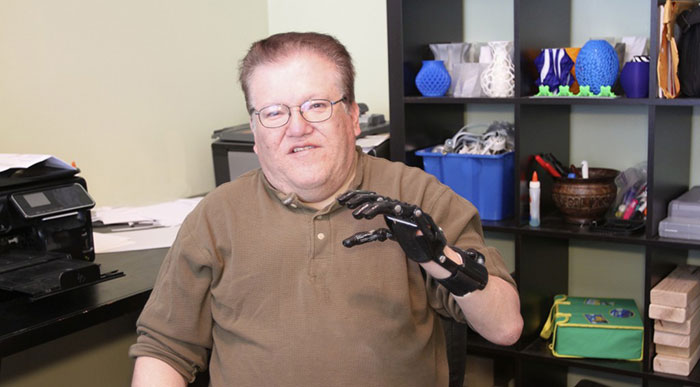 The design for the Cyborg Beast arrived after a consolidated creative effort. Derived from the Robohand by Ivan Owen and Richard van As, the 1.0 and 2.0 versions came to light under Jorge Zuniga. A revised gauntlet design sprang from Frankie Flood, and Ivan Owen and David Orgeman are responsible for the 5-slot cable tensioning system. The final product requires a few hardware pieces, Velcro and padding. Yet with these extra materials, the price still sits at $50 versus the “high-tech” myoelectric prosthetic over $40,000. The smile on Delgado’s face when he practices his grip and continues to admire the Beast conveys the astonishment anyone watching the video ought to realize:

During the course of the interview, we see Delgado have different epiphanies such as how he can now trust using his left hand to drive. Picking up objects and trusting the grip that does not put all the tension on fingers or would slide out of the weak grip of the myoelectric prosthetic excites the interviewer and Delgado. At some point in the near future, it will seem absurd for those with access not to take such full advantage of 3D printing. As is the case with the Cyborg Beast, 3D printing not only offers a functional replacement, but an improvement over what until recently would be considered cutting-edge technology. More stories in mainstream media hail 3D printing as the technology of the future, yet it is apparent that 3D printing is here now, ready for the willing.