Lately there has been a lot of talk about scaling up 3D printers and the efforts being made towards getting bigger parts out of bigger printing volumes. With stereoltihography, and in this case with EnvisionTEC top-notch UV based DLP, small is nice too. Especially when it can get an amazing level of detail. 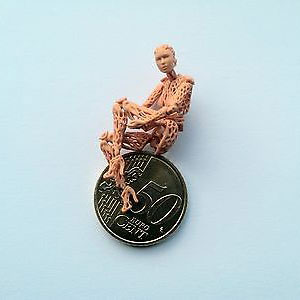 KT is a 54 millimeter tall android developed by artist Maxime Chertof and 3D printed using a Perfactory multi lens 3D printer by EnvisionTEC. It was named after Chertof’s wife Katy (so she is actually a female android) and can stand on top of a guitar pick. Or sit balancing on top of an AA battery.

That is because KT was developed to be as articulate as a real human being, with “joints” in all the same places a real person would have them. Unlike a real person, though, individual parts were 3D printed separately and then assembled.

For Chertof this is the beginning of a new generation of androids (and eventually robots and cyborgs) that will no longer be made of metal and bolts but will be 3D printed. “3D printers can print many materials,” he said to EnvisionTEC, illustrating how his concept of a future robot will have a body 3D printed in carbon fibre with integrated wire and electronics inside the shell. “They will run on flexible batteries which will allow for movement and use artificial muscles, not hydraulics like in old tractors,” he concluded. 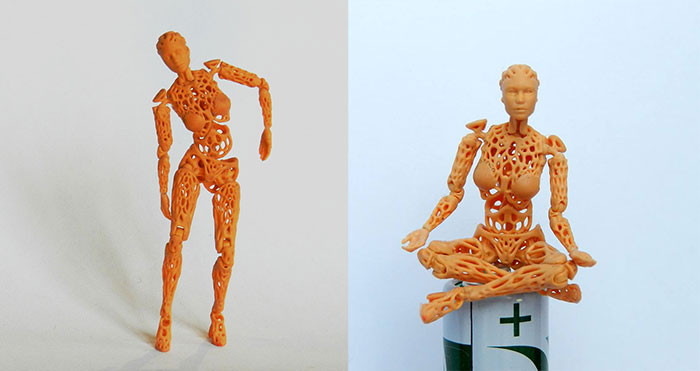 I personally could not agree more. Fully functional robots will be possible only when we assemble them from 3D printed “smart parts” with embedded electronics. That means they could have a plastic arm already programmed to “be an arm”. It would connect to a torso programmed to be a torso and so on. The central brain would no longer need to coordinate all the movements and will be able to concentrate on cognitive functions.

A lot of these technologies have already been invented, it just takes a creative builder like Chertof to put it all together. Through 3D printing these functioning androids may be closer than we think. If you are curious to see what our society will look like, I suggest you take a look a Swedish TV series Akta Manniskor (Real Humans).