3D Builder is Mixing it Up — Two Filament Strands, One Extruder

You’re going to have to forgive me a lack of some details in this article about the Builder 3D printer from Code-p west, based out of The Netherlands. It comes from a serious brain overload during the 3D Printshow last week, and not getting pertinent facts down in note form before my said overloaded brain dumped them. So I was chatting to someone (can’t remember who) that pointed me, excitedly, to the Builder 3D printer. If whoever it was reads this please do drop me a line and I will add full credit. [Update: A little note from Simon Chandler at Creat3D reminded me it was, indeed, him. We were debating, again, about you know who, and STILL nobody knows for sure. Regardless, Simon and his colleagues are lovely people, open to said debate and I seriously do hope it works out for them. They’re doing a great job with the CubeX and the Ultimaker 2]

When I asked [Simon] what was so exciting he told me the printer had been developed to process two filament strands through a single extruder. I had to know more. So I headed over to the stand and asked if it was true — are they mixing colour. 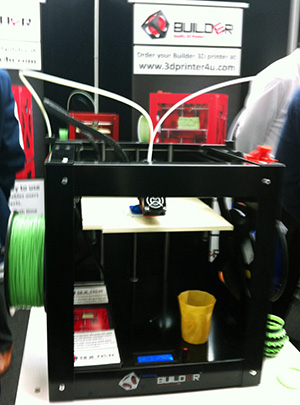 They absolutely are and I tried to capture it here, but didn’t do a particularly good job. A photography course is on my bucket list for a time when I have some free time, but that probably won’t be any time soon, so I can only apologise once again:

The machine itself, at first glance, is akin to the many other boxy entry-level 3D printers, but what you can see are the two filaments entering the single extruder. The science behind it is that there is a single heat chamber that melts both filaments for printing. But there are two motors for pushing each filament strand through the nozzle. Each can be used individually, or both together, which results in a colour mix. This is novel …. And exciting.

But, before I was allowed to get too carried away with this revelation, the guys pulled me back. There is catch — while they have proved the feasibility of this on the 3D Builder printer itself, the software is yet to catch up to facilitate true colour mixing. I’m thinking some open source collaboration within the maker community is the most likely way to drive this forward in the fastest and most productive way ….. ?

The printer is available for €1580 from 3DPrinter4U, as is a range of PLA filament.