Zortrax growth slowed down in the second half of 2015

Zortrax, the Polish manufacturer of the award winning M200 3D Printer has reported its financial results for the year 2015.

The company has made clear in 2015 of its intention to list on the Warsaw Stock Exchange in 2016, depending on the market conditions. It raised $1.5m in July 2015 in a pre-IPO round from bondholders and new investors for 15% of the company. To keep informed its shareholders, Zortrax is publishing its financials numbers on a quarterly basis. These accounts demonstrate that the Polish manufacturer experienced very strong growth until mid-2015. In the second half of 2015, the revenue remain quasi stable compared to the first half of 2015 (+4% in USD terms). 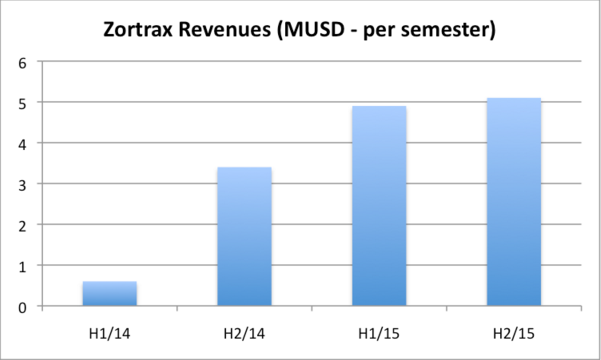 In 2015 the company maintained a healthy margin and managed to keep its cost under control. Net profit margin remained high at 21% of sales in 2015. Total headcount at mid 2015 was 120 people. Zortrax benefited in 2015 of a strong demand for its materials. Share of materials sales went up from 10% to 17% in 2015.

With the cash raised in 2015, and the cash flow generated by the operations, Zortrax ended the year 2015 with a healthy cash position. The company will keep investing in its R&D in 2016. Cash will also be spent to raise Zortrax profile in the build up of the expected IPO. Depending on market conditions and Zortrax cash requirement, management expects to list the company in the 2nd half of 2016.