XEOS: A New 3D Printer Concept With a Twist

So, in the last few months there has been a throng of new entry-level 3D printers. It’s hardly a surprise that so many are coming to the market as awareness is hitting a critical level and uptake by designers and the growing maker movement is looking like it will not be too far behind  — the projected figures for the sector in the next decade look set to rocket.

I’ll be honest, sometimes, it is really hard to find something distinctive to write about in order to advise our audience about the latest 3D printer launch. This time it is not a launch, it is a new concept for the ‘prosumer’ 3D printer space and one that has a great deal going for it. It is important to note that this one is still conceptual — as designer, Stefan Reichert, states: “The XEOS 3D project is my capstone bachelor project at the University of Wuppertal, Germany.”

There is a full size prototype of this sleek, stylish 3D printer with some distinctive design features that are fully intentional — the aim was an iconic look and feel with ease of use supplied as standard. With a front door that opens upward for easy access and a one-hand unlockable print tray — part removal is intended to be a no-nonsense affair.

Beneath the attractive surface though, despite its small footprint (19” x 17.5” x 10”) it offers a build size of 5” x 5” x 5” — which is, apparently, suitable for 80% of products produced in a design studio. I can’t really comment on this one way or the other, but I do know people that can …. and hopefully will. But XEOS brings something completely new — a whole new concept in deposition movement and delivery.  So while it is still FDM, and it delivers PLA and ABS materials, there is an entirely new robotic arm on a wafer handling robot — the first of its kind. 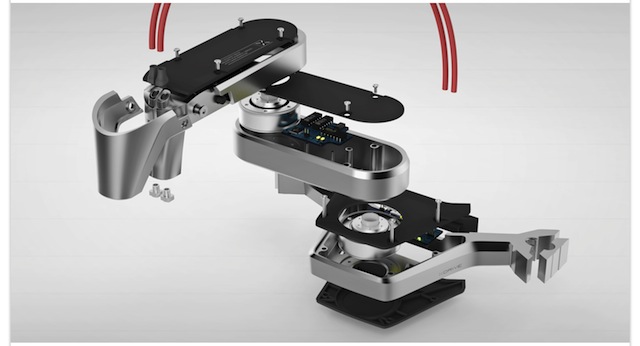 The video explains it much better than I can, take a look, it is quite different:

From an objective point of view there are no parts on show and no mention of build quality, surface finish or pricing — capital or consumables. Indeed, as an academic project this may not make it to a commercial launch but Stefan has demonstrated some impressive design skills and market knowledge! I would be surprised if some of the established 3D printer vendors are not talking to him — they should be!