When 3D Printing Technologies Make a Real Difference — It Matters!

It’s no big secret that I love 3D printing and what it can do. I have been known to get carried away by the applications in fashion and art, and I do love finding and writing about these stories, but at no time is my day uplifted more than when I write about 3D printing making a real difference to a real life. In terms of providing a reality check on what is important these stories are humanity focused, inspirational and provide insight from which we all can learn and take stock. 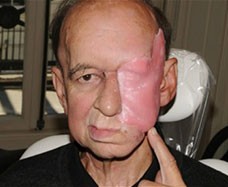 None of us can ever know when — or how — trauma will touch our lives. For Eric Moger, it happened almost five years ago when he was diagnosed with cancer, in the form of a large tumour on the left side of his face. However, emergency surgery to remove the tumour followed by aggressive radio- and chemotherapy resulted in Mr Moger losing the whole left side of his face, including the eye, his cheekbone and most of his jaw. The consequences of this were devastating, not just in terms of his appearance and subsequent unwanted attention, but also simple abilities we all take for granted such as eating and tasting — Mr Moger was fed through a tube in his stomach.

It has been well documented that CT scanning and 3D Printing technologies go hand in hand for many medical applications. For Dr Andrew Dawood — an avid evangelist and user of high-end 3D printing tech and the proprietor of Cavendish Imaging and D2W in London — these technologies used in conjunction with each other allowed him to propose and develop a customized solution to help restore some semblance of normality to Eric Moger’s life.

With a CT scanner Dr Dawood took detailed scans of Mr Moger’s skull to build up a complete 3D image and scanned his facial features in 3D. He explained: “We put the CT scan and facial scan together and used software to plan what we wanted him to look like.” From this data, Dawood and his team designed a titanium scaffold implant to replace the missing bone. 3D printing of Mr Moger’s skull was key to this development, as well as for the production of a plastic plate to help form a seal at the top of his mouth, with the intention of allowing him to eat and drink.

3D printing tech was also used to create a facial shell made of toughened nylon from which a silicon mask could be moulded. The mask covers the whole disfigurement on the left side of Mr Moger’s face.

Following the successful outcome for Mr Moger, Andrew Dawood now hopes to develop new techniques for directly 3D printing the silicon mask: “At the moment we cannot print silicon itself, but there are some new machines appearing in industry that print a silicon like material, so we are hoping to do this in the future.

For Eric Moger though the impact has been startling: “I was amazed at the way it looks. When I had it in my hand, it was like looking at myself in my hands. When I first put it up to my face, I couldn’t believe how good it looked. Before I used to have to hold my hand up to my jaw to keep my face still so I could talk properly and I would have liquid running out the side of my face if I tried to drink. When I had that first glass of water wearing the prosthetic face, nothing came out – it was amazing.” 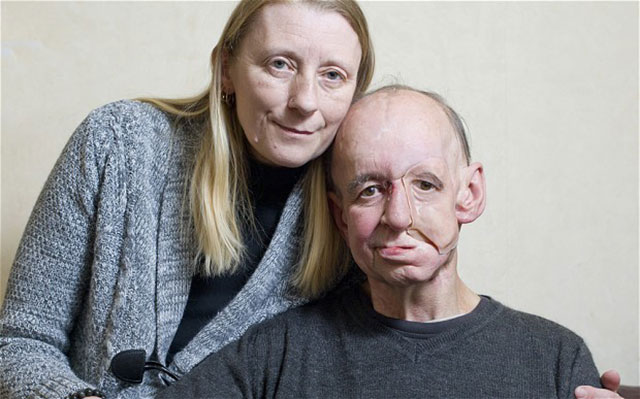 And it is not just the individual, for Miss Hunger, Mr Moger’s fiancé, there is new hope for a brighter future: “The first time I saw him after the [original] surgery it was a big shock. You get used to seeing the whole person, but suddenly he had a big hole where other things should have been. He does wonder why I am still here and want to get married to him, but when you love someone you love all of them. Now he has got the prosthesis, it looks so lifelike. I don’t know how they have done it but it really does look like him. When he puts it in, he has his whole face back. We have been in limbo for such a long time now, so we are hoping to get some sort of life back.”

The pair are now planning their wedding once again, after having put it on hold for the last four and a half years.