During the last decade or so, the watch has pretty much gone the way of the cufflink — that’s to say only seen on the wrists of top executives at prestigious galas and other above-bacchanal events for the elite. Much of the blame/gratitude for this absence can be directed at the mobile phone and other portable electronic equipment — today’s devices of choice for specifying not only where we are in geographical terms via GPS and the five senses, but also for the exact location in the fourth dimension — time. During this bleak period, wearing a timepiece on the wrist has also been a strong statement regarding the appreciation of the always better ways of the old and how showing (off) one’s status with a particular wearable item was not considered peasant-like or ridiculous in some other way (I’m looking at you, fake jewellery-infused “Millionaire” watches).

Recently – and fortunately – however, there have been clear and concrete indications of the once ubiquitous item resurfacing once again in the mass market, pushing sentimentality and other negative associations and attributes aside. In the public forefront, the traditional watch is currently reinventing itself as a smart watch – something once again suitable for everyone – in the form of a Pebble and upcoming takes on the matter from (according to rumours) Samsung, Apple and other consumer electronic giants. The smart watch is of course quite a far cry from the Mad Men era watches, but avid WatchTime magazine subscribers might be joyous to hear that applying new technology to watches doesn’t necessarily mean that the fundamental nature – or looks – of the said companion have to be different from what it once was. One example of this is the rvnDSGN watch, a 3D printed titanium watch.

The company, labelling itself as a boutique watch brand, is the brainchild of industrial designer Zach Raven. Besides applying 3D printing tech infused titanium to his analog tickers, Zach has also decided to utilise another fairly new approach to the process of making a consumer product, as the rvnDSGN watches – or at least their most visible parts – are manufactured completely in the US (and per order). Keeping the indicative arms in the correct position at all times, the beautifully designed laser sintered titanium shell of the series 1 watch is powered by a Swiss ETA 980.106.7 jewel movement and comes with straps – crafted obviously out of leather in either pebbled graphite, gold or brick nubuck tone – that are handmade in New York City. Having a showcaseable, but more importantly self-enjoyable, watch always requires certain maintenance procedures, but removing scratches from the face can be a task worth tons of blood, sweat and tears. To prevent this, the rvnDSGN watches are equipped with a sapphire crystal lens that should be virtually scratch proof and physically unable to break. 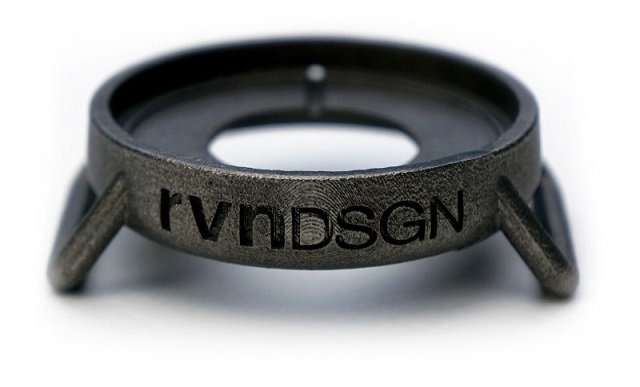 Whenever adjectives such as luxury, quality and prestige are used when communicating a product to the public, the immediate and spontaneous association is often expensive. However, these 3D printed titanium watches are not competing with the likes of Audemars Piguet, Louis Monet or even Tag Heuer, as the price for a rvnDSGN series 1 watch is $599. That is, of course, still a lot of money, but if looking for a timepiece in general, I would personally still throw in the couple of needed extra Benjamin Franklin featured bills instead of saving a bit and jumping on the smart watch bandwagon. At least until the most anticipated models are available.