The old form of creating art called lithopane has been dug up from the naphthalene. After tweaking the fundamental concept with some technical 3DM & P perks, it’s now found its way to Thingiverse. The arrival of this technique to a 3DP repository – art made with lithopane first saw the daylight in late 1820’s Europe – might seem like a strange match, but it actually was originally created to bring out the third dimension in flat art, thus making it a spot-on addition to MakerBot’s offering. In the olden days a lithopane was made by using a thin layer of translucent porcelain in the etched or molded pieces of art, which when combined with a lightsource behind them created an illusion of 3D.  Below is a comparison image of the traditional lithopanes with and without light to show the effect of light. 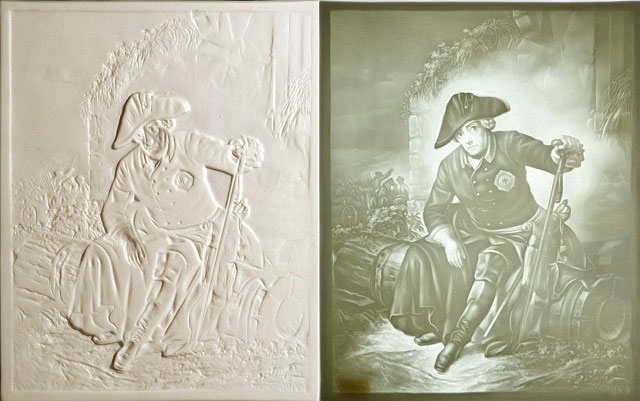 If the Mona Lisa lithophane shown in the feature image would not be your first choice if interested in this technique, Thingiverse fortunately provides an option to make a 3D printed lithopaneisque art from any image desired. The tool then creates the model – one resembling a “rough terrain map”. This model can then be printed with a light colour plastic, 0.2mm layers, 1 shell and hung in front of a (changing) light source – such as a window – to enjoy your personal evolving-by-the-hour art.