January saw a flurry of challenges, competitions and surveys launched that centre around designing in 3D and /or 3D printing. It is a great way of engaging a wider audience, particularly when prizes invariably include winning your very own 3D printer.

MakerBot is also running a design challenge to promote its new Customizer tool, which, according to the firm, basically lets everyone be a designer on Thingiverse. Customizer is an app built on the 3D design program OpenSCAD that designers use to upload customizable designs to Thingiverse. From there, anyone can take the basic template, download it and customize it.

The MakerBot Customizer Challenge is open to every one — whether you are experienced with OpenSCAD or just learning — to upload new customizable designs that the entire MakerBot Thingiverse community can use and be inspired by. 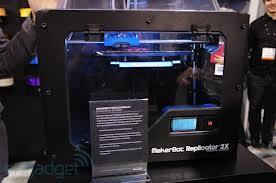 The challenge is open to three categories of design — useful, wearable and artistic; and the winner of each category will win their own MakerBot Replicator 2X Experimental 3D Printer. The challenge went live last week, but will be running until 8th March 8, 2013.

MakerBot is planning to announce the winners at the annual arts and technology festival SXSW, and as if the 3D printer itself were not motivation enough, MakerBot is also promising plenty of promotion — of the design and the designer that gets the top spot.

All entries submitted must be tagged with “Customizer,” “Customizer Challenge,” and the category. And MakerBot recommends entrants encourage promotion through their social networks to get people to use their design to create their own custom things as the greater the use the more points won for the entry.  Judging will be conducted by a panel of judges who will pick a winning design in each of the three categories — designs will be considered subjectively by the judges and objectively by the number of times people use the design to create new things.

This seems like a great opportunity for design and customization, and with the possibility of winning a Rep 2X – it has to be worth a shot!