Stratasys Is 3D Printin’ n’ Truckin’ with Autodesk on the 3DRV

The eight-month 3DRV road show kicked off in mid May — right in the middle of the Bay Area Maker Faire — in San Francisco: with Autodesk, Stratasys and other big tech names on board, it is going to make over 100 stops in a coast-to-coast trip, to bring a new awareness on how 3D printing, and digital manufacturing technologies of the additive kind, are changing the way things are designed and made.

3D Software giant Autodesk is the main sponsor of the roadshow that just stopped by Stratasys’ headquarters in Minneapolis on June 30th. Other sponsors include huge technology brands such as HP (who has been voicing its newly rediscovered interest for 3D printing), nVidia, RV producer Jayco and FARO, a 3D measurement technology multinational. 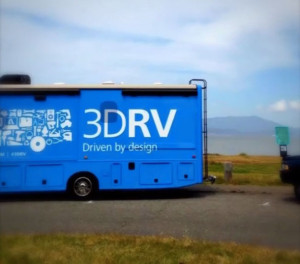 The journey, that also stopped by the RedEye on Demand (Stratasys’ rapid prototyping service) HQ, will include visits to Made in Space and to UAV producer 3D Robotics. Everything is being documented, primarily on Autodesk’s social media pages, as well as on the official 3DRV blog by writer TJ McCue, who is also a TV host, the owner of Refine Digital and a 3D printing enthusiast.

Further planned stops (more can be added along the way) will take the 3DRV to the Ford Motor Design Factory and Virtual Reality Center, to General Electric in Fairfield, CT, to the MakerBot Innovation Centers in NYC, to the Smithsonian and to the NASA Langley Research Center. The final destination is back in San Francisco, scheduled for December 17th.