The story behind the DOOM gun

MyMiniFactory is ready to go to war now it has printed a lifesize version of the legendary Big Fragging Gun from the DOOM series for the launch of the latest edition.

The new game is out this month and it’s a back to basics reboot that will feature on the PS4 and Xbox One, as well as the PC. It’s been hailed as a glorious return to form for the franchise by the specialist press and it needed a dramatic prop to get the message across at the launch.

The Big Fragging Gun is certainly a dramatic prop!

It took more than 20kg of rigid.ink filament to create the iconic BFG weapon, which may actually stand for something more aggressive than Big Fragging Gun. It also took more than 1000 hours to create, over 36 hours went into the design work and the finished piece weighs more than 12kg.

The gun is huge

It’s no surprise when you see the finished monster that is a 1:1 scale for the gun in the games. It’s 100cm long, 50cm wide and 50cm high, which means it dwarfs most guns you’ll see in the real world.

Kirby Downey spent several days with game creators Bethesda, cutting the virtual representation of the gun into 70 separate parts before the team set to work on printing. Supplier rigid.ink gets a special mention for providing a filament that required relatively little post production in terms of sanding and polishing. 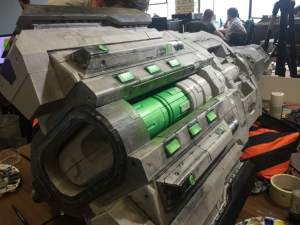 PLA was perfect for the role

The PLA filament was ideal for this complex structure. If the gun was made from metal, the weight could have been frightening.

It was printed in one colour, uniform grey, because there was a paint shop maestro waiting in the wings to take the finished gun and turn it into a work of art. Sarah Wade gave the weapon its finishing touches and MyMiniFactory was clearly proud of the team effort, as well as the finished piece.

“We’d like to give a shout out to everyone involved in bringing this project to life,” the company said on the blog. “Kirby Downey for helping with the design, Sarah Wade for the awesome paint job and finishing and, of course, rigid.ink.”

A stellar level of detail

The level of detail on the gun is simply superb and although it is non-functioning, you wouldn’t want to find yourself staring down the wrong end of this intergalactic weapon. In the game it was designed for blowing the heads off intergalactic zombies and aliens. It still looks like it could do the job back here on Earth, it’s that realistic and it’s that spectacular.

We are sure there will be other attempts at this iconic gun from the game, from makers all around the world. We’re looking forward to seeing that, too, but until then we can’t wait to see more from the designers who submit to MyMiniFactory as they’re producing some stunning work.

The company is pushing the boundaries of 3D printing, in the aesthetic sense before our very eyes. We think it’s awesome.

It’s a 3D printed gun with a positive message

The last 3D printed gun that garnered this much attention didn’t exactly put a positive spin on 3D printing as an artform. So we’re pleased to put pieces like this in the spotlight as it shows the kind of impact that additive printing can have for one-offs and limited number productions.

Thor’s hammer and Iron Man’s suit in The Avengers are just two examples of 3D printing and the process is tailor-made for Hollywood blockbusters that often just need a few of each piece to get them through production.

For those interested in printing the BFG for themselves, you can get the files here.