Stilnest is the newest member in the ever-growing crowd of 3D model repositories. However, Stilnest – based in Germany and focusing on accessories (i.e. currently mainly jewellery) – promises to possess that crucial differentiating factor and have a completely varying profile compared to its competitors with a focus on tech and targeting especially the makers of the world. Bold claims – especially considering the masses of different takes on the 3D model services we’ve already either had the privilege or sometimes even been forced to witness – but do they actually hold water or are they more of what could, very politely, be labelled as marketing? Let’s take a short trip around the site and find out.

The service has been live only for two weeks, and accordingly it’s still in beta phase as it rather oddly requires registration before entering the actual site (which is currently only in German). Right off the bat I’m left to wonder if this is one of the aforementioned differentiating factors of the service – though not as ‘exclusive’ as an invite-only concept, mandatory registration – members only – doesn’t exactly create an image of a come one, come all –type of service! Besides this initial issue, on a visual basis the site does look quite good – it’s clean, simple and subtle with calm colours and non-intrusive graphical elements, which make up for a good foundation for a service where the products are in the limelight instead of the service itself, which should in fact only serve as a general framework. 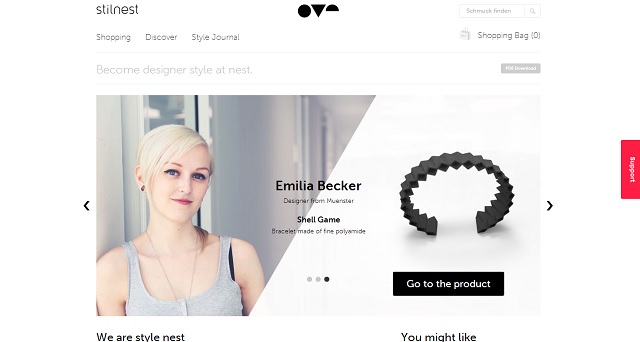 Category-wise the site’s top left offers the curious browser three sections to choose from – shopping – discover – style journal. Selecting the first one –shopping – takes the user to a browsing view with different designs – the hosted designers’ 3D jewellery models. This view only offers a glimpse of five actual designs, so the typical modern day challenge of struggling with too much choice isn’t apparent on Stilnest – at the moment at least. The designs can be narrowed down or sorted by the used (and assumingly the designer’s intended) material, by users likes and the number of times the product has actually been added to the virtual basket alongside the CC numbers. After that the buyer will be left to wait for two weeks shipping time. However, the site sheds no further light on the technical aspects here– a positive considering that users are not generally interested in the 3DP-jargon world – such as are the objects printed in-house or elsewhere – which might be interesting to some of us.

Discover lands the user to a very homepage-esque location, which is mainly composed of submarketing-type elements, which encourage the user to register, browse the designs (ending up in the shopping section again), emphasize some exclusivity features of the site (each design is a set limited to 100 pcs) and highlight the upcoming feature of choosing from various colours.

The last section – Style Journal – pops up a new tab in the browser, which is basically a blog – mentioned to be updated with new content once a week – with designer bios, short editorials and such. And of course links back to the store.

That’s about it for the basics of the site.

For the designers who want to have their creations hosted on Stilnest, the basic functionality regarding finances and other aspects seem quite unambiguous, yet not fully complete. A share of the sales goes to the designer, there are three different levels with varying perks for creating more content on the site (e.g. a feature interview for an entire collection) and the material choice is simply between silver and polyamide.

However, the ever more apparent rights issue would be interesting to highlight on the site more clearly as well – especially as one of Stilnest’s core elements relies on the exclusivity, created by the limited number of 3D printed sets. If I had, for example, a great ring design I wanted to share with the world – and possibly with Stilnest’s audience as well – the final proprietor of the design’s rights would have great relevance in my decision to choose the most suitable marketing and distribution channels – preferably one that would not waive my rights as a designer away completely.

But what about the emphasized differentiating factor, is it apparent and clear with Stilnest? In short, no – the basic core concept of Stilnest reflects many similar qualities to other design-oriented 3D model repositories we’ve seen  – the business model (disregarding the pros and cons of the limitation aspect), the visual layout and structure, perspective and vision, categorical decisions – but that’s not to say that they’re completely off the mark. However, me personally as a huge fan of difference, oddities, curious and the unsafer choices, I was left a bit disappointed by the lack of true vision. With a sufficient amount of courage and vision there is still a growing market filled with a mass of generic companies just waiting for that crucial truly innovative leader to copycat on. That’d be a relevant position for any company to have, but with 3D repositories we’re still left to wait for that which there only can be One, or maybe two.