Ana Rajcevic is familiar with 3D printing and pushing its boundaries. The award-winning fashion designer turned to Shapeways to help manifest her latest fashion statement in the form of exaggerated headgear. Known for elongating the human form in high fashion, her latest work continues the trend. In order to achieve her vision, Rajcevic took advantage of AutoDesk 123D Catch and Maya’s 3D animation software and subsequently pushed the limits of 3D printing processes.

Rajcevic took an original hand-crafted mould and captured the image to transfer into digital. With the help of Kristoffer Joseffson, Lucianno Letteriello and Octave Perrault, two trials took place to test the capabilities of 123D Catch. She added over 800 hair-like structures to the exaggerated headpiece. Ana explained, “I was inspired by insect-like sharp, hairy, textures. I wanted it to appear as though they were growing from the material, with a tough and bristly look of almost needle-like quality.”

Technicians at Shapeways admitted it was a risky project pushing the machine that ended with a “miracle of laser sintering”.  The final piece was printed with Nylon in the New York studio. Inspired by the result, Ana took another step closer to full digital realization by removing the hand-crafted model from the production process. She simply scanned her head and used the dimension to mould her new design to a custom fit. Of course, Maya software gave the artist her clay and scalpel. 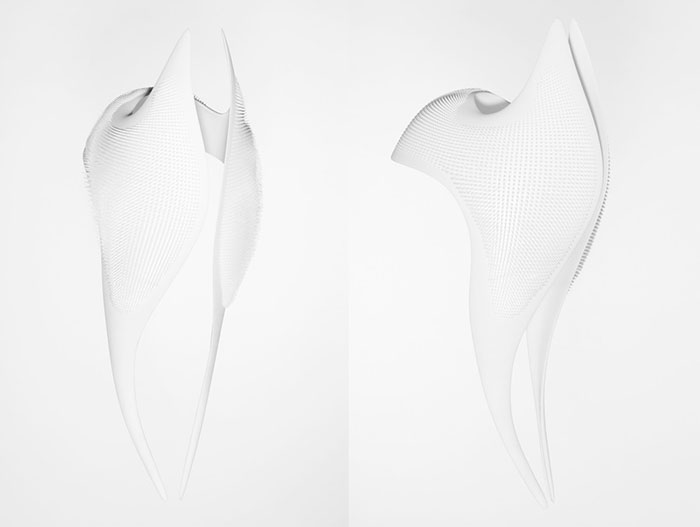 The final look recalls the movement of fashion exoskeletons. There are a few things I remember from The Devil Wears Prada, and one is the trickle down effect in fashion. The blue sweater from a sale’s rack acting as an example of a faded echo from a catwalk 5 years earlier. If there is truth to the ebb and flow of fashion, the exoskeleton model should be available soon, most likely online for customization. While I admire Rajcevic’s intricate headpiece, I am looking forward to forearm and shoulder exoskeleton fashion statements for my nights out on the town.