Shape-It-Up is a new interactive based interface for CAD. It comes from C-Design Lab at Purdue University and the output appears surprisingly good, appearing to be aimed at a general amateur, although higher end amateurs may be interested in this development too with other input methods.

Whilst only cylinders are used as shapes for manipulation, that base geometric shape offers the widest range of desirable, naturalistic output forms. No Borg Cubes here.

Anarkik3D’s 3D input device offers one radically different approach to Shape-It-Up for professional CAD users. Anarkik’s founder recently proffered the advantages of tactile based input methods over virtual gesture input. The designer of the 3D input device, a member of the Edinburgh Hacklab, has provided an advanced solution to the input problem.

‘We present a novel interaction system, “Shape-It-Up”, for creative expression of 3D shapes through the naturalistic integration of human hand gestures with a modeling scheme dubbed intelligent generalized cylinders (IGC).

To achieve this naturalistic integration, we propose a novel paradigm of shape-gesture-context interplay (SGCI) wherein the interpretation of gestures in the spatial context of a 3D shape directly deduces the designers’ intent and the subsequent modeling operations. 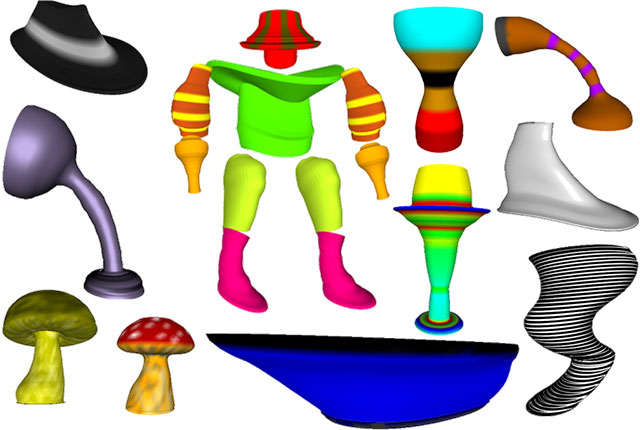 ‘Our key contributions towards SGCI are three-fold:

Firstly, we introduce a novel representation (IGC) of generalized cylinders as a function of the spatial hand gestures (postures and motion) during the creation process.

This representation allows for fast creation of shapes while retaining their aesthetic features like symmetry and smoothness.

Secondly, we define the spatial contexts of IGCs as proximity functions of their representational components, namely cross-sections and skeleton with respect to the hands.

Finally, we define a natural association of modification and manipulation of the IGCs by combining the hand gestures with the spatial context. Using SGCI, we implement intuitive hand-driven shape modifications through skeletal bending, sectional deformation and sectional scaling schemes.

The implemented prototype involves human skeletal tracking and hand-posture classification using the depth data provided by a low-cost depth-sensing camera (Microsoft Kinect). With Shape-It-Up, our goal is to make the designer an integral part of the shape modeling process during early design, in contrast to current CAD tools which segregate 3D sweep geometries into procedural 2D inputs in a non-intuitive and cumbersome process requiring extensive training.’

You can watch introduction video to Shape-it-up below:

Combined with Skanect, Microsoft’s own Fusion, and other Kinect based 3D scanning applications, a strong suite of cheap 3D input for home entertainment systems is rapidly emerging.