Fresh off a gorgeous display in London, artists Linlin and Pierre-Yves Jacques had their creativity mined by Sculpteo in a genial and refreshing interview. The London 3D Print Show was the first major exhibit for Linlin and Pierre-Yves. Both artists spoke of their background in various art mediums and styles as well as experience with design programs.

Art has a tendency to reflect movements in technology with past and present mediums. Painting breathed a new freedom with the advent of photography as both captured the zeitgeist. 3D printing has an immediate impact on sculpture, yet it will take artists like Linlin and Pierre-Yves to tap into the interwoven paths available with 3D printing. 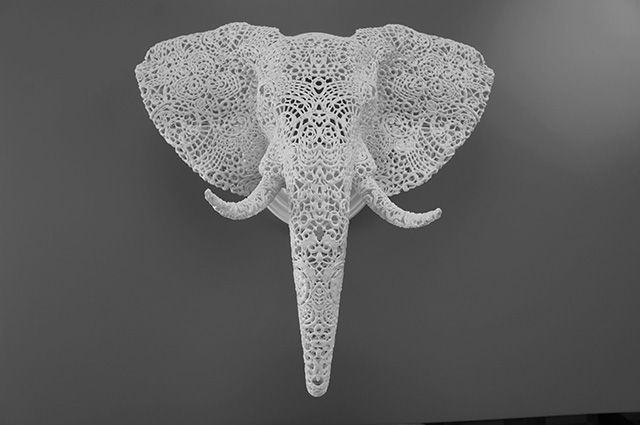 Reflecting a common motif in the industry, the two work together on their projects. Instead of individual projects, there are “four hands and two heads”. While collaboration can often create conflict especially when expressing artistic imaginations from eclectic backgrounds, their London show, succeeded by the 3D Printshow in Paris this weekend past, proves otherwise. As Linlin states, “Our cultural differences are really a strong point. We like to travel and then we come back to our studio to extract the very best of our common inspirations.”

The art work resonates nature imbued with cultural forms and shapes. The designs effuse elegance and blossoms of exponential expansion into animals. The forms lead the audience into a religious state of meditation. Circles loop and swirl forming hypnotically into a male elephant head. A giraffe with its crown appearing jewelled sprouts from a mount with an Elizabethan ruff collar. These are a simple sample of the work infused with cultural signifiers and elements of nature which inspires the artists most “with its infinite beauty.”