When my grandfather developed Parkinson’s, I started undergraduate school as a Biological Sciences major. He knew this and pulled me aside during a family visit to tell me with a smile and a wink, “Maybe one day you’ll find a cure for me.” I failed him. However, a collaboration of scientists from Yokohama National University, Tokyo Institute of Technology, and C-MET Inc., a company that manufactures and distributes stereolithography (SL) systems and photo-curable resins, has developed new photopolymers with bionic brain possibilities. There was a lot of science involved and analyzed by minds much sharper than mine, yet essentially, a team led by Yuya Daicho, Terumasa Murakami, Tsuneo Hagiwara, and Shoji Maruo addressed a problem and found a solution with 3D printing. 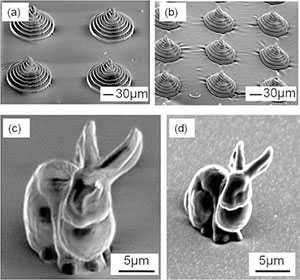 In order to create an object with high conductivity, scientists will carbonize material by heating the object at high temperatures. While this process is effective for conductivity, the heat will melt and deform the object. The team of scientists successfully manufactured a resin with high carbon content, for conductivity, and high bond energy. The bond energy promotes structural fidelity after pyrolysis, chemical decomposition of a substance by heat. Structural fidelity is tantamount for objects with complex microstructures, and the study successfully produced microstructures with steps (pyramid), overhangs, and cantilevers. The information can be overwhelming, but the background sets the stage for the exciting possibilities. It was important for the team to address the needs of carbon-based structures because carbon’s allotropic nature makes it useful as electrode and mechanical materials with applications in microelectromechancial systems and biosensors. In order to maintain the desirable characteristics of carbon and the form of microstructures, an epoxy compound buttressed the resin by joining oxygen atoms to form strong, chemically resistant adhesives. Ideal because it contains a benzine ring with a high bond energy and lacks aliphatic and licyclic groups (easily combustible), the team used resocrinol diglycidyl ether. Also, the low viscosity eases the process for 3D laser writing and microtransfer molding. C-MET’s stereolithographic techniques provided the tools for layer by layer composition. These microstructures are ideal for biosensors.

Biosensors have progressed with the burgeoning field of neuroscience that hopes to combat afflictions such as dementia and epilepsy previously perceived as inevitable debilities. These microstructures with the epoxy compound protecting carbonized conductivity and structural fidelity provides a template for biosensor productions. How biosensors work to fight against neurological afflictons from paralysis to blindness is via electrodes implemented in various portions of the brain to read and stimulate neural systems. The applications can be explained in a Popular Science article. It is frigthening and disarming to watch someone melt away from you due to Parkinson’s as I am sure it is for various other mental afflictions. The pervasive melancholy and sense of loss may be a contemporary experience as driven research ushers in new information in neuroscience. In the wake of discovery blooms innovation so that even if I failed, we have a bright future.