Operating from his manufacturing facility in Taiwan, Dr. Henry Thomas utilized the abilities of MakerBot’s new desktop 3D printer to find models for his novel bicycles that would save millions in production costs. Under the patronage of entrepreneur Steven Cranitch out of Australia, Henry found a way to mimic the “natural motion and sensation of running” with a bicycle. Testing proved taxing on time and money. To assuage the painstaking effort, Henry turned to MakerBot’s Replicator 2 Desktop 3D Printer. 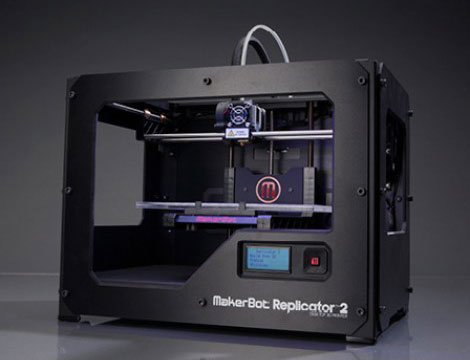 The MakerBot Replicator 2 strives to be a habitists printer with professional quality products. And for anyone not in the know, it has a resolution capability of 100 microns, about as thin as a sheet of paper, and a 410 cubic inch build volume. With a 1lb spool of natural PLA filament, biodegradable, the printer starts at $2,199. It also uses a powder covered steel chassis for workplace durability. I notice that there are a lot of 30’s in the advertisment: over 30% more space, using over 30% less energy, and so forth.

Not only does the printer use less energy, but innovators like Henry put the printer to use to form a more effecient folded form of his bike. The new form eliminated significant labour costs as well as time consuming and expensive experiments that could be easily hashed out and solved using Makerware and the swiftness of a printed and complicated product capable with the MakerBot Replicator 2.  Another innovation from the land of Oz as the delineation between personal garage and industrial professionalism blurs; something to cheer and investigate.