Two years of constant announcements, inventions, and innovation generated a widespread feeling of “awe” at the new possibilities opened up by low-cost 3D printing. Now, with a greater awareness of additive manufacturing in general and in all sectors of manufacturing, it seems safe to say that the market is calming down a little. At least, that is one of the general trends that emerges from 3D Hubs’ October Trend Report.

This does not at all mean that the market has stopped growing, or even slowed down. Just that the confusion and straight out “craziness” is toning down a bit, helping 3D printing to grow into a more solid, stable, and established (though no less disruptive) industry. While innovation continues and new players enter the market constantly, some industry leaders are emerging. This shows up as a general “steadiness” in 3D Hubs’ report, which is possibly the most “real time” window into the market’s evolution. 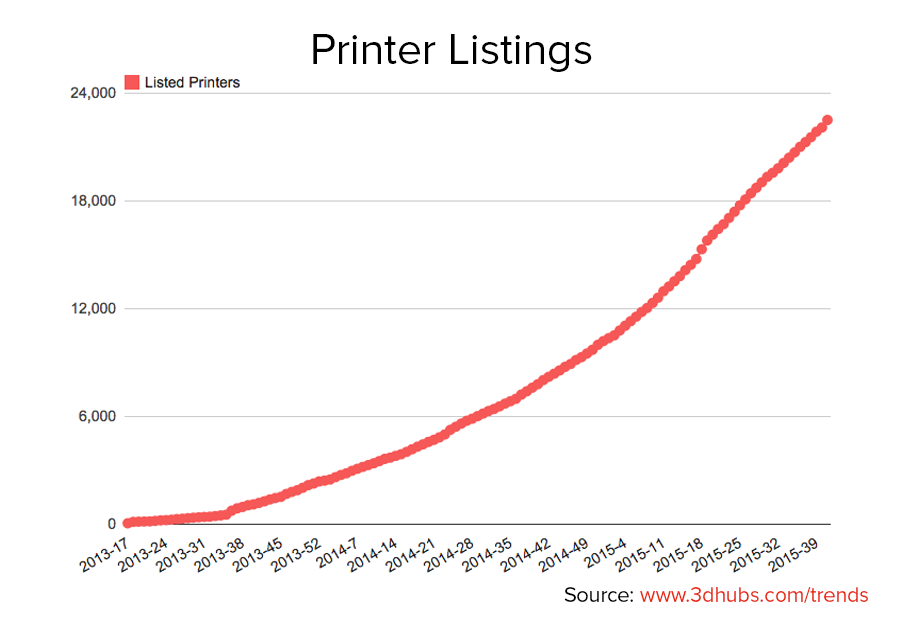 The fact that the market is growing shows clearly in 3D Hubs’ Printer Listings curve. The good news is that not only is it still going upward, but it also seems to be getting steeper and steeper (which means exponential growth). The network is now topping up at close to 24K registered 3D printers (in 150 countries) and getting ready to release its 3D Hubs HD service, which will add industrial-grade 3D printing services, such as i.materialise, Sculpteo and NRI, with as many as 37 HD Hubs included at launch.

When we talk about relative calm, we refer to the 3D printer market. While there are always small movements at the top of the food chain (the Top 20 Highest Rated 3D Printers), the top rated machines often include the likes of Prusa, Robox, Formlabs, Afinia, Zortrax, Kossel, WASP, MakerBot, FlashForge, and Witbox. Other players move in an out and sometimes get straight up to the top, like Rapide, the new entry Rigidbot, CTC, and Big Builder. 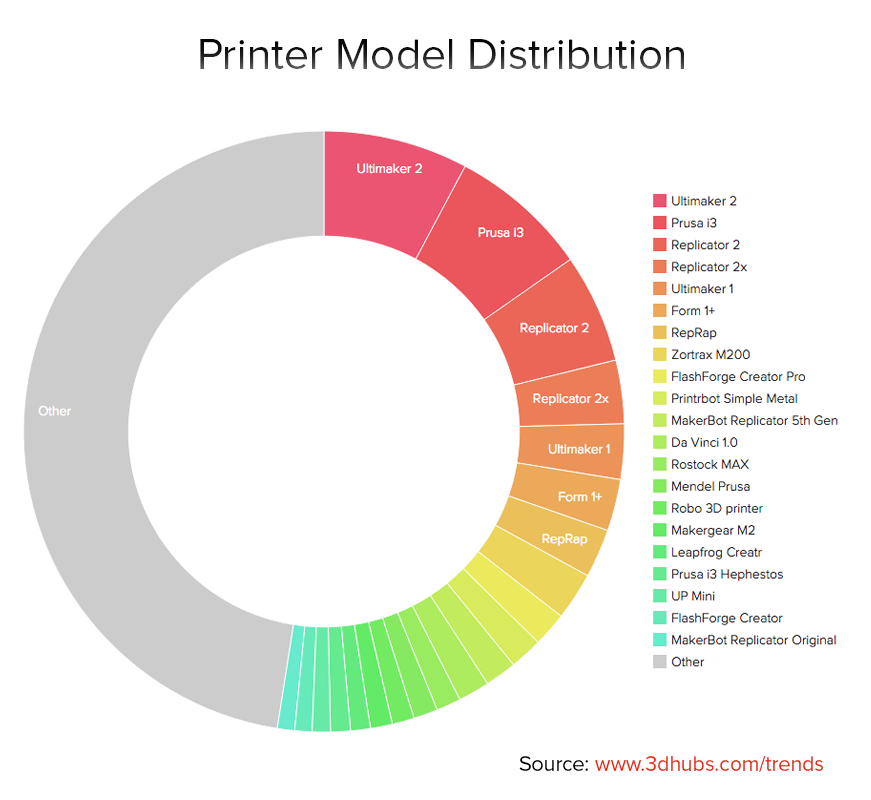 Those who do not appear in the Top 20, often appear in the Top Trending Printers list. This can mean that they are presenting newer models and still working to leave their mark. This is the case, for example, of the Duplicator i3, the Ultimaker 2 Extended, the M3D Micro, and the LulzBot TAZ 5.

On the professional side, things appear to be even more consolidated, with Stratasys and 3D Systems occupying nine out of ten spots. The only “outsider” is EOS, with the Formiga P100/110, which is the only SLS 3D printer with a strong presence on 3D Hubs, at this point (waiting for the new low-cost systems to gain ground). On the other hand, the fact that the Projet 660 (the full color “mini-me” machine) is the most common professional grade system with 115 registered machines, shows how successful this platform is in B2C services.

The top cities are also quite consolidated, with the largest western metropolises (New York, Los Angeles, and London) now taking the top three spots and a few smaller, yet highly creative, cities like Milan, Paris, and Amsterdam trailing shortly behind. The only one missing here seems to be Barcelona.  By the way, if you are wondering about 3D Hubs’ events in your city make sure you check out the calendar. Because the 3D printing industry may have calmed down a little, but the flat sea means that it is time to go full speed ahead. And you don’t want to miss this ship.