Large scale 3D printers are of interest to many industries and individual makers. UK-based David Akers has developed his own version of a delta type 3D printer that can produce objects beyond the boundaries of a typical tower design machine. His design is called RappiDelta and he is seeking funding for at least £50,000 via Kickstarter to start production and further development of the scanning capability of this large format 3D printer. 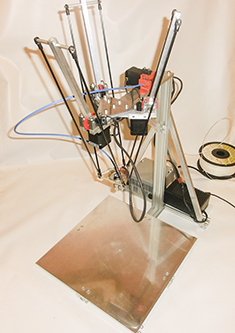 The design of RappiDelta largely follows in the footsteps of Johann Rocholl, who has been pioneering the design of delta style printers. What is unique in David’s design is that it doesn’t rely on the tower construction, which will yield the opportunity to make builds up 400mmx400mmx400mm in size (in the final production model). The frame is made from aluminium and thus far his testing work has been done with a Yoda bust printed at around 40mm per second and a layer thickness of 100 microns.

One of the key aspects of the delta design is to get the position of the three arms correct at the start of the printing process. The RappiDelta kit comes complete with optical endstops following David’s testing and the result was both better accuracy and repeatability. 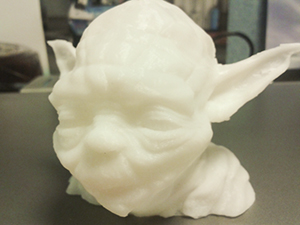 Another unique feature of RappiDelta is the ability to scan objects within its build area. This feature is not 100% complete in the prototype and upon reaching the funding goal, part of the money will be used to finish the work for the scanning technology. The final version will utilise a high-resolution camera possibly with a miniature projector depending on the technology he will select. The assembly will attach to the print head and as the RappiDelta moves around the object that is being scanned servo motors will ensure that the ‘scanner’ is always pointing at and focussed on the object.

You can check further specifications and the status of this new Kickstarter project here as well as see the RappiDelta in action in the video below.