One thousand units in less than two years of operations may not be mass market numbers but when you add up all the small companies selling around these numbers of their 3D printing systems it appears that desktop 3D printing is certainly heading in the right direction to wider adoption. Q3D, a Little Rock, Arkansas based 3D printer manufacturer hopes to speed up mass adoption by releasing coloured versions of their OneUp and TwoUp 3D printer DIY kits, which start below $200.

The family owned and run business has been selling its own 3D printers as well as OEM components for other 3D printer manufacturers. Founded in 2012 the company has already sold over 1000 3D printer units and now wants to widen its target audience while improving its 3D printers — both functionally and aesthetically. 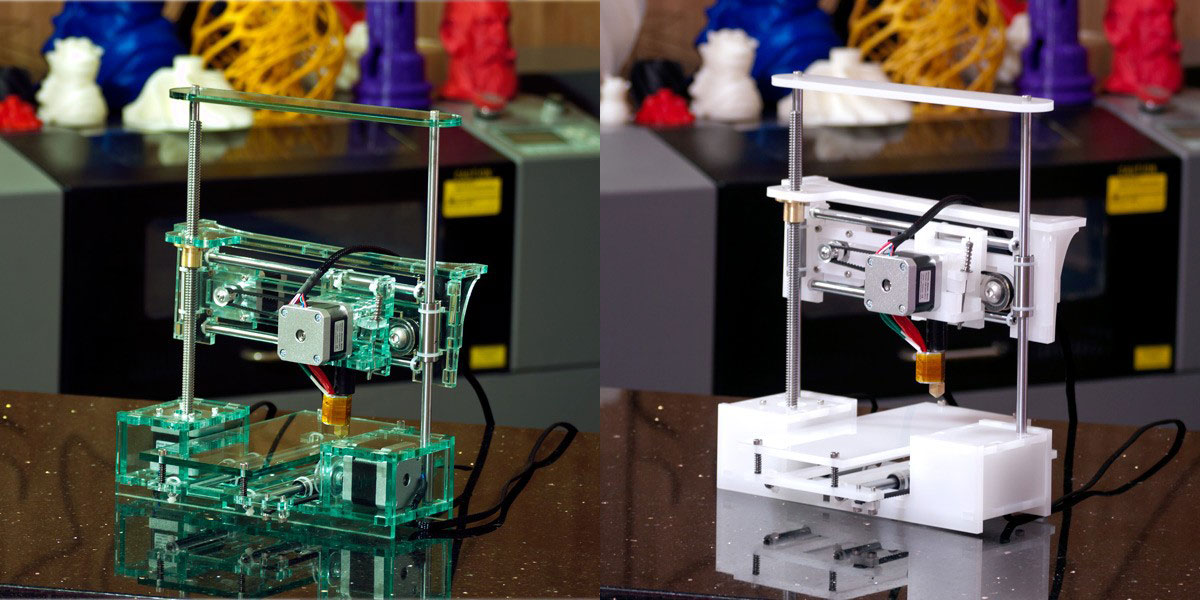 The standard OneUp, in satin black will still be available for $199, while the new version will be sold for $299 and 10 different laser cut acrylic frame colour choices, including fluorescent, transparent, clear and solid colour versions. The systems will feature the same 50 micron maximum layer resolution as the original OneUp while adding new features such as a precision machined flexible shaft to reduce Z-wobble and less noise due to the rigidity and natural dampening properties of the acrylic frame.

Q3D’s printers, the OneUp as well as its larger counterpart, the TwoUp, are very portable scalable systems. The basic build volume for the OneUp is 100x100x125 mm, while the TwoUp goes up to 175x175x125 mm. Both systems feature 150 mm/s max travel speed and 100 mm/s max print speed. The included acrylic bed is not heated (however a heated basal bed option is available for an extra $80). The kit also includes Super Torquey NEMA 17 stepper motors, print board electronics, Marlin firmware, the anuBIS Hot End Extruder for 1.75 mm filament and all the necessary power and hardware components (nuts, bolts and bearings)  to put it together.

If you are familiar with all this, the OneUp and TwoUp may be just right for you and, for a price comparable to that of an early iPod, you could take home a 3D printer instead. While having to assemble one’s own 3D printer may not necessarily fit in with the small family business’s mass market aspirations, the price point is definitely on target.