The SLS race is literally on fire as new models and projects are announced based on the, now open, original SLS patent. The goal is to reduce the price of an SLS system by a factor of 10 and the first models are beginning to make their way into shows. The latest to do so is Patrick Lie’s Polyforge, with a working prototype set to be on display at the upcoming Bay Area Maker Faire, a crowd-funding campaign planned soon thereafter, and final launch expected next year.

Lie is an electrical engineer and a tech industry veteran, who has worked at both large companies (including Microsoft’s Windows and Bing divisions) and start-ups in San Francisco. However, he says, he was always fascinated by 3D printing’s promise of easy manufacturing, literally and figuratively, and, thus, got started with early Makerbots, building RepRaps and then designing and building his own extrusion 3D printers, which he used to prototype parts for the Polyforge printer.

“When I learned about SLS printers and their advantages over existing printers, I got very excited!” says Lie. “No more worrying about overhangs or removing support material, fully solid prints, they seemed like they could really fulfill that original promise of 3D printing.  However,” he adds, “that excitement faded when I learned how much they cost.”

The thought of seizing the opportunity to create an affordable SLS printer and bringing that power to small businesses began to percolate. So, Lie quit his job as an engineering manager. “And here I am,” he says. “I have a functioning prototype and am currently in the process of refining the design for production. My goal now is to launch an Indiegogo campaign this summer.” While pricing has not been finalized, if the campaign is successful, Lie expects his Polyforge to be in a price range similar to mid-range laser cutters, set at roughly $10,000 to $20,000. 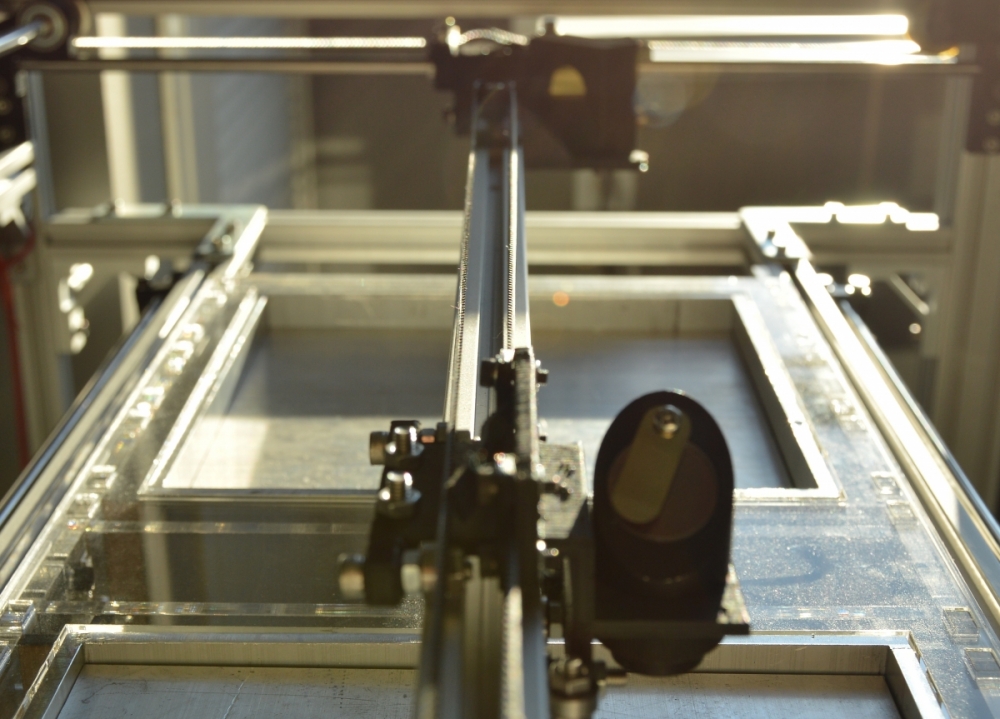 Because the Polyforge printer uses a CO2 laser, it theoretically supports a wide a variety of materials, such as wax, polycarbonate, or polyamide-coated metals or glass; however, so far it has been tested mainly with white nylon. “Actually, one of the trickiest bits was acquiring a suitable build material, specifically the nylon powder.  Similar to the SLS machines themselves, this space is mostly dominated by a few large corporations from whom it can be tricky to acquire powder.  I expect, as the technology gets into the hands of more people through machines like the Polyforge printer, we’ll see more entrepreneurs enter the powder material space.”

Lie sees SLS 3D printers as sharing more in common with professional laser cutters than desktop devices and, thus, he predicts they will take a different path from fused filament and extrusion systems in general. “Because the technology is relatively complex and powerful,” he says, “I think it will still tend more towards business use rather than consumer use. I expect we’ll see SLS machines that are not only priced for small businesses, but are simple enough to use that they won’t require a dedicated operator.”

This means that more designers, engineers, architects, researchers, or students will able to directly translate their ideas into physical form, leading to faster innovation and shorter development cycles. That is the promise of all 3D printing, and low-cost SLS can only make it arrive even faster, especially if increased collaborative competition ignites the race.