NOOKA is 3D Printing Away in NY with i.materialise

New York City based fashion design company NOOKA had a first taste of 3D printing when it made a special edition of its Zub 40 watch collection available exclusively on 3D System’s Cubify network. Now the” technoprogressive” group of designers wants more and has signed up with i.materialise to 3D print futuristic concept pieces for an exhibition entitled “ZONAL- Extending the Body and Mind.”

The show is set to take place in the Big Apple this weekend, during the Wanted Design Show, starting on Friday May 16th. Some of the products – concepts intended to be consumer products – can truly give us a glimpse of what is to come, as 3D printing technologies find their way further into design studios and in manufacturing facilities.

Although futuristic in its inspiration, the project is inspired by the Hindu Vedic chakras’s belief system of energy points in the subtle body. It will thus asks eight designers to present an item corresponding to one of seven specific “zones” of the human body (Foundation, Locomotion, Creation, Core, Heart and Dream). 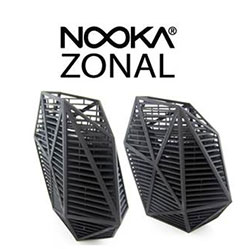 “3D printing has so much potential to revolutionize the whole manufacturing and consumer landscape, and even bio-medical technology” said the the firm’s founder,  artist/designer Matthew Waldman. “NOOKA has some reach in the fashionista world that I felt I can do a small part in getting the excitement I have for 3D printing out to a wider audience,” he added.

All the items will be 3D printed by i.materialise using a wide range of materials, colours and technologies. Rem D. Koolhaas’s Highrise Shoes, for example,will be in polyamide while the mind boggling Cosmic Messenger by Luca Nichetto and Lera Moiseeva uses both transparent resin and polyamide. If 3D printing is to make its way further into consumers’ consciousness, the Belgian 3D printing network is all set to play a big part in it.