“Waste is only waste if we waste it.” That’s according to will.i.am — 3D Systems’ Chief Creative Officer since January of this year. It’s a pertinent statement for many cultures that have become complacent about how much ‘stuff’ they throw away. This ‘stuff’ is all encompassing, with food waste being a particular bug-bear of my own. When I learned that the world produces enough food to feed the world but just can’t distribute it properly, it pulled me up short — it’s verging on criminal and certainly heart-breaking when you consider the numbers of children and adults dying from starvation on a daily basis. But that’s probably a rant for a different place!

Another notable resource that produces mountains of waste is plastic — there has been much discourse about this issue, in many cases directly related to the 3D printing industry courtesy of different plastic types being the dominant process material for desktop 3D printers. 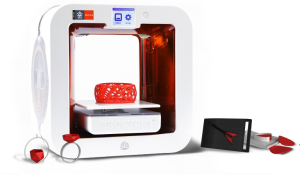 And thus will.i.am’s ethos as stated has been embedded into the newest 3D printer from 3D Systems — the EKOCYCLE Cube. From his earliest appointment the celebrity creative director intimated that this was something he would be involved in, and he’s bringing big brands (in this case Coca Cola) along with him in the push to raise awareness of waste and, of course, to further the ambitions of 3D Systems.

Recycling plastic for 3D printing is not an original proposition, of course. There have been a raft of filament recyclers developed in the last year or two with the aim of saving the planet and driving down the costs of 3D printer filament. Only yesterday I was talking to Joris Peels about this very issue. He believes that bringing down the cost of filament through recycling  “is the best thing for 3D printing and will push the 3D printing industry outwards and make more business models possible by lowering the total cost of ownership.”

However, what 3D Systems is offering with the EKOCYCLE Cube is something different to a plastic recycler — it is a proprietary 3D printer that will process PET plastic filament — produced, in part, from discarded plastic bottles. The filament is supplied in cartridges, each one of which will contain approximately three recycled 20 oz plastic Coke bottles. This equates to about 25% of the total plastic within the cartridge.

With a build envelope of 6 x 6 x 6 inches the EKOCYCLE Cube can print with 70-micron resolution and features auto-levelling and a built-in colored touchscreen user interface. The printer is available now for $1199 and will come supplied with ready to print ideas curated by will.i.am, specifically 25 music, tech, and fashion minded designs for 3D printable accessories.

The point being made here is still about making and engaging a new audience with an emphasis on RE-making. According to will.i.am: “This machine prints in post consumer plastic. That means taking this waste, and not wasting it and turning your ideas into beautiful objects printed in this 3D printer.”

You can see a bit more in the video below: