More news from NYC based MakerBot today, although the news is emanating from Las Vegas, specifically the Licensing Expo which is taking place today (June 17th), where senior representatives from the company, in partnership with Pretty Ugly, LLC, have delightedly announced that 3D printable Uglydoll content is now available at the MakerBot Digital Store! 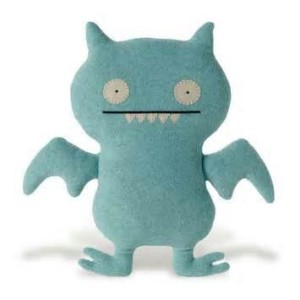 MakerBot reports that in close collaboration with the Uglydoll creators, the team has designed a series of 3D printable collectibles featuring four of the most popular Uglydoll characters: Babo™, Wage™, Ice-Bat™ and Ox™.

These characters are making their 3D printed debut today and are being introduced as T-pose characters, designed to be 3D printed and fully poseable, with additional 3D printables from the Uglyverse to follow.

Toys are emerging as a strengthening trend for all the 3D printing companies and it’s not hard to see why. MakerBot itself is not a month on from the Sesame Street announcement which garnered many headlines, this is all set to do the same. Toys are toys, but they’re also big business and it doesn’t hurt that they are great for marketing. Quite how the traditional soft and plush characters that have established an iconic status will translate to hard plastic among the very young remains to be seen. However, at an educational and engaging level, MakerBot’s strategy is a good one. This is another very strong brand, Uglydolls were launched by Pretty Ugly in 2001 and have since garnered affection among the young and old alike. By teaming up and introducing 3D printable content of the brand, the aim is to excite a whole new generation of Uglydoll fans and makers alike — Win, Win, Win.  The collectability of the Uglydoll line is also paramount among its fans and being able to 3D print their own — or have one 3D printed — is a captivating option. Indeed, according to Pretty Ugly, the ability to 3D print an Uglydoll character and then share among enthusiasts is what the company believes to be the perfect fit with the Maker community!

“Taking Uglydoll into the world of 3D printing seems like a natural extension for our Uglydoll characters,” noted David Horvath, co-founder of Pretty Ugly.  “Sun-Min and I have been fans of 3D printing for a while and we are excited to be working with MakerBot on bringing our characters to life in a whole different 3D world.”

On the MakerBot side of the deal it’s a perfect fit for the company’s Digital Store, the remit of which is to sell original, fun, and collectible digital content specifically designed for MakerBot Replicator 3D Printers.  It also helps when the President is a huge fan of the brand, which Jenny Lawton is. Apparently Wage and Ice Bat are two of her favorite characters. She said: “We are so excited to offer Uglydoll 3D printable content in the MakerBot Digital Store. The story behind the creation of the Uglydoll characters by David Horvath and Sun-Min Kim showcases how creativity can positively impact lives.  We love the fun, light-hearted stories behind the Uglydoll characters and hope that they will help inspire a whole new generation of makers with their 3D printed adventures.”

The MakerBot Digital Store offerings of Uglydoll 3D printable content will come in four installments: first, the T-pose characters of Babo, Wage, Ice-Bat and Ox are released today so Uglydoll fans can bring these adorable 3D characters to life. Second will come a unique 3D printable Uglydoll bus that will take miniature Uglydoll characters on a summer vacation. Fans who 3D print the Uglydoll bus will be encouraged to post its travels on social media and inspire makers to take their creativity on the road.  Third will be the four Uglydoll characters in dynamic stances — posed to enjoy their environment and 3D printed world. Last will be a set of 3D printable environments for the Uglydolls to live in.  The Uglydoll bus, poses and lifestyle sets are set to be released over the summer on the MakerBot Digital Store.