The suffering caused by the loss of a body part is inestimable. However, the loss of a nose, is possibly one of the most distressing. Jane Frances from Changing Faces backs this up explaining that it is the most socially challenging out of all facial disfigurements. Our nose and eyes is usually the area where other people’s gaze is focused as they are part of the communication triangle of our face.

The nose is the centre of this triangle and whether consciously or not, it is often the first thing other people we interact with notice. This is especially true if there is something unusual about it in terms of feature or shape, and most certainly if it is missing altogether.

A nose can only be replaced with a similar structure, which usually requires surgical construction. However, if a person’s nose was removed as the result of cancer, this may not always be possible, because regular monitoring is essential. In these cases, comfortable prosthesis is the next best option. For children, sometimes neither is possible, due to the still growing facial structure and the fact that the prosthesis will likely require several surgical procedures to attach it to the growing bone.

Another problem with prosthesis solutions is that not everyone has access to a service like this. For example, in developing countries there is a major lack of prosthesis services leaving tens of thousands of people suffering from the loss of their noses because of cancer or injury.

In the western world we are more fortunate, but the process is uncomfortable in many ways, and usually requires a lot of traveling, waiting and several encounters with doctors. Furthermore, even with advanced skills that enable the handcrafting of silicon polymer noses  — the newly constructed nose many only last for 6 months.

For those who followed the 3D4D Challenge, Fripp Design and Research is no stranger to working in this area – the organisation placed second with their innovative project to construct soft tissue prostheses solutions for medical purposes.

They have been working in this field for three years and the feedback from their first client was very positive. The process was so easy that she was initially skeptical that it could work: 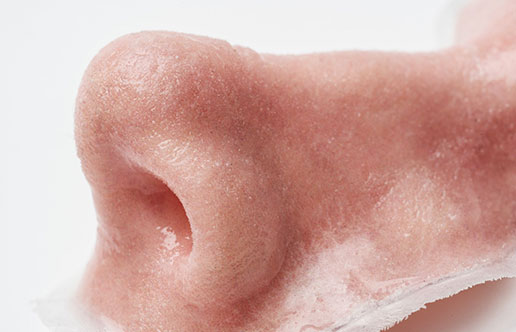 First a picture of her face was taken using an array of 3D cameras from different angles, another picture was taken with a regular camera to define her skin tone. Then a 3D CAD file was created using the 2D and 3D images in order to match the contours, texture and skin tone, so that there would no sign of joints between the face and the new nose.

Several materials were tested for biocompatibility and a starch material was identified that would fit the purpose of being soft and strong enough, and layer by layer it became the newly constructed nose. One final phase was required, soaking the nose in medical grade silicone fluid in order to make the nose strong.

The silicone soaking changes the colours of the material slightly, which was a problem at the beginning, but the team was able to adjust the original colour accordingly, so that at the end it would be a good match.