Materialise is a leading provider of additive manufacturing and medical software and of sophisticated 3D printing services.

It was founded in 1990 by current CEO, Wilfried Vancraen. Materialise operates via 3 segments: Materialise Software, (ii) Materialise Medical, and (iii) Materialise Manufacturing. Total headcount was 1,304 at end 2015 and 1,244 at end 2014. The company has been listed on the Nasdaq since July 2014 under the symbol MTLS. Total number of shares outstanding is 47M with 33M being owned by the CEO. Since the IPO the share price has halved.

The lack of profitability is weighing on the share price

Materialise maintains a double digit growth of its revenue in 2015. Revenue increased by 20% in 2015 excluding OrthoView which was acquired in October 2014. The growth did not translate in the bottom line as adjusted EBITDA fell significantly in 2015, from €5.8M to €3.7M. In 2013, adjusted EBITDA was at €7.7M. The company expects to achieve similar level in 2016. 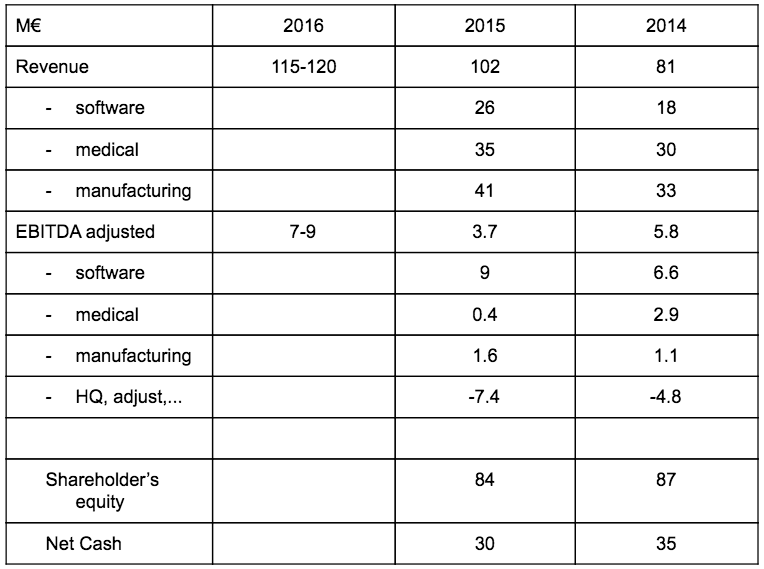 Profitability may remain low in the years to come?

The 20-F report published  on the 28t of April 2016 sheds lights on the significant risks faced by Materialise to maintain or increase its profitability. Indeed the market segments in which the company operates, are characterized by vigorous competition, both by entry of competitors with innovative technologies and by consolidation of companies with complementary products, services and technologies. In particular, the barriers to enter the software, medical and industrial markets with 3D printing solutions are decreasing rapidly.

In the Materialise Software segment, the availability of computing devices with continually expanding performance at progressively lower prices contributes to the ease of market entry. Additionally, there are certain open source software applications that are being offered free of charge or for a nominal fee that can place additional competitive pressure on the company. In addition, 3D printer manufacturers, which closely work with their customers, may successfully bundle their own software solutions with their equipment, which may make Materialise independent software solutions obsolete. In addition, companies that have greater financial, technical, sales and marketing and other resources, including market leaders with significant in-house capacities in software development, or existing computer-aided design, or CAD, software providers, may, at any point in time, enter the additive manufacturing market and very rapidly gain a significant share of the markets that the company targets.

In the Materialise Medical segment, medical device companies are investing in 3D printing solutions that may compete with Materialise software solutions, products and services. Companies that initially rely on MTLS to enter the additive manufacturing market for medical applications may, as they gain experience and as 3D printing technology gains strategic importance, decide to develop their own in-house solutions and enter the market themselves with their own software, products or services, thus becoming competitors and denying Materialise continued access to their distribution channels.

In the Materialise Manufacturing segment, as additive manufacturing gains importance as a strategic technology, Materialise customers are likely to bring 3D manufacturing in-house and reduce or even discontinue using Materialise 3D printing services. In addition, competitors with more efficient or profitable business models, superior techniques or more advanced technologies may take market share away from the company.

Because of these and other factors, competitive conditions in the industry are likely to intensify in the future. Increased competition could result in price reductions, reduced revenue and operating margins and loss of market share, any of which would likely harm Materialise results of operations.

Based on the current market capitalisation of $320M and net cash available of €30M, Materialise valuation of €250M implies a multiple of 31 times the mid value EBITDA forecast for 2016. Considering the risks faced by the company to maintain its margin, current share price could suffer significant downward pressure. The lack of liquidity may exacerbate any price movement.

Finally the company will keep investing significantly in the coming years, limiting the capacity to generate net cash. From the transcript of the 2015 financial results presentation, the management stated: “The continued growth of Materialise in general, and of Materialise Manufacturing in particular, will require continued capital expenditures in 2016, resulting in an expected increase in depreciation of approximately 30%.”