I popped into my local Maplin store recently and had a natter with a few of their staff. They were, as ever, most polite and helpful. Maplin Edinburgh has a new front-of-store display. Rather than a standardised Point Of Sale set-up, it is, with pertinence, a personalised set up… of 3D prints and printers. The staff gave me an insight into their UK national sales of 3D printers, which I will return to.

Also here in Scotland, the electronics retailer has invested some £100,000 in a new store at Glasgow Airport, which will open tomorrow (March 1st) and will feature tablet accessories, phone accessories and, as you would now expect, 3D printers. The new store set up is designed to encourage customers to browse in-store whilst awaiting their flight, to peruse and pursue products, including 3D printers as potential purchases. The store’s in-store experts will provide advice on all aspects of the technology and electronics.

Back in July last year, Maplin, which has some 200 stores across the UK and Ireland, including 14 in Scotland, beat the Dixon’s’ Group to become the UK’s first electronics and electrical goods chain to stock 3D printers. The Dixon’s Group now stocks 3D System’s Cube 3D Printer. The Group includes other high street names PC World and Curries, and as announced a few days ago, the Carphone Warehouse are in merger talks that could create an electrical goods and mobile-phone group with a market capitalisation of more than £3.4 billion (USD$5.84 billion).

Maplin stocks the Velleman K8200 3D Printer kit for £700 and recently added PP3DP‘s Up! 2 Plus 3D Printer to its stores at £1619.99. The Up! 2 Plus promises straight-out-of-the-box functionality and auto-calibration. These two devices constituted the Edinburgh Store’s aforementioned display, along with a host of 3D printed trinkets. 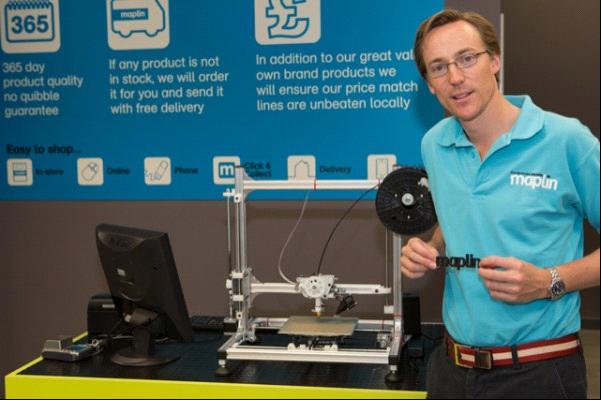 The insight that was provided was that Maplin has sold but a few 3D printers nationally since last July, only 25 units in those eight months.

My perspective upon this is that consumers are under duress at this time, whilst many investors consider 2014 to be mid-economic cycle, this cycle has laden the average potential customer in the UK with £30,000 of national debt each from the 2008 economic catastrophe. Whilst this is a variable that only a proportion of those individuals will be baring in mind, in part as taxation is relatively similar to before the collapse on a month-to-month basis and economic awareness is not present in many of those potential buyers, the overwhelming feeling of coming out of a mammoth trough, despite recent increases in the Consumer Confidence Index, should be born in mind.

Whilst many in the UK struggle to buy things as basic as food, with 350,000 people having received emergency food from Trussell Trust food banks alone in the past year, close to triple the number helped in 2011-12, 3D printers aren’t going to be high on the priority list.

However, as the economy picks up and investor and consumer confidence returns, the recovery from the wider economic problems of the UK will provide a platform for 3D printer sales to improve via the established variables that promote growth in the technology sector. Also, more simply, the 3D printers Maplin stock are good, but not necessarily what customers want: Afinia, Type A, Ultimaker and many more offer printers that rival PP3DP’s strong Up! device within a comparable price range.

Back to the Glasgow Airport development, John Cleland, CEO at Maplin, said: “With 7.4m passengers passing through Glasgow Airport last year, it’s evident this is a fantastic opportunity to raise awareness of the Maplin brand.” The store will also offer a click-and-collect service enabling travelers returning to Glasgow to pick up orders, or get them delivered to their homes, including 3D printers.