I could go with the oft-used cliché of not enough hours in a day! Or how about too many articles in a day! Or too many 3D printers at a show! Take your pick on the reason for the tardiness of writing this article, which germinated while I was walking around the 3D printshow in London a few weeks back now ….

There is a clearly identifiable trend strengthening across the 3D printing industry, one I spotted early signs of as 3D printers emerged across regions, most notably South America earlier this year. At the other end of 2013, there is a proliferation of 3D printers coming from member states of Europe and it was plain to see at the 3D Printshow as they were paraded almost side by side.

Both the Sharebot and WASP have sprung up in Italy. Poland is home to Omni 3D, Spain is the country of origin of the Witbox, while I have already covered the BeetheFirst developed in Portugal.

The proliferation of extrusion-based “personal” 3D printers from all corners of the world is not that surprising considering the trajectory of the 3D printing industry. And each region is producing their own and will likely find most success within that region, while also harbouring global dreams.

The WitBox 3D printer, from established Spanish company BQ is already enjoying local success. The strategy is to reach a wider audience though, as evidenced by the company’s presence at both the 3D Printshow in London and at Euromold in Germany and they are also looking for distributors from further afield in the US. 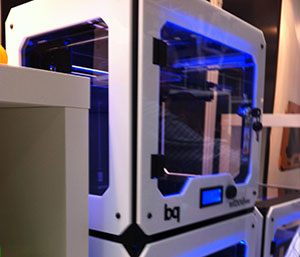 BQ’s seven year history has seen it diversify from multimedia devices into the development and sales of its Witbox 3D printer, which competes well with its peers, both in aesthetics and productivity.

The print chamber is enclosed (but not heated) and, interestingly, can be locked for safety, a consideration of the fact that this is ultimately a 3D printer to be found in homes. A nice touch, I thought, and pre-emptive. With a fairly standard (these days) print volume, accuracy of 50 microns can be achieved. The machine processes PLA material, again, one assumes for the home environment. The RRP of the WitBox is €1,600.

Omni3D (previously RapCraft) from Poland was also present at the 3D Printshow, with a range of 3D printers, based on the same platform, but catering for different applications and sizes. The team was so enthusiastic about what they are doing, great advocates for their nation and technical capabilities and keen to share their vision — dogs and all — with the world.

The company has a comprehensive portfolio of 3D printers, accessories and materials. 3D printer wise they offer the original RapCraft kits, as well as an assembled version (1.3). Further advancements have seen the development of the Factory 1.0 3D printer and the Architect 3D printer. All producing some nice, quite large in some cases, parts.

The WASP project was a part of the Italian contingent at the 3D Printshow, and an inspiration it was too. The project is a blend of commercialism, academia and altruistism. The brainchild of Massimo Moretti of CSP srl, though, the altruism is the driving force with the goal of 3D printing clay houses for people in developing nations.  The project has resulted in a range of 3D printers, all based on the Delta platform, of various sizes, but the most striking by far is the large scale version printing with clay. The smaller platforms, typically print with plastic filament. 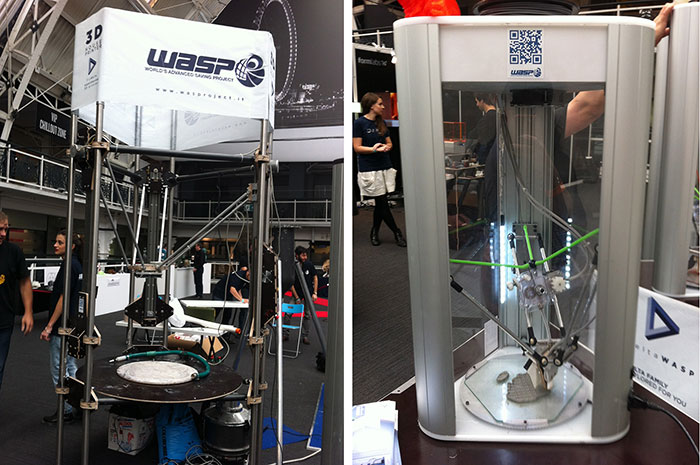 The plan is to go bigger though — for the houses. It turns out the WASP project is so called for a couple of reasons. Massimo’s original idea was formulated as a result of a mud dauber, a little wasp that built its nest using only wet ground, depositing it and consolidating it. From this, WASP became an acronym reflecting the ultimate goal —World’s Advanced Saving Project.  The commercial aspect of the project involves selling machines (with most notable success in Italy to date) to fund the dream of printing clay houses. All the people involved are fully invested and wholly driven to achieve this.

It was hardly surprising then that at the International 3D Printshow awards, the WASP project walked away with the accolade in the Green category — well deserved.

One of my key take aways from this particular show was local production finding success in their own regions. It’s a growing phenomenon and one likely to increase, particularly when USPs are as narrow as they are.