This sub-$1000 delta 3D printer with a 12 inch tall build area has been anticipated for a while now, Hackaday saw the Deltaprintr at the World Maker Faire, last September. The Deltaprintr uses three stepper motors, located under the acrylic build platform, to control the carriages that move the hot-end. Both the drive reels and the bearings that the carriages ride on are manufactured via high-precision CNC machining.

The minimal carriage is designed to allow one to slide the assembled carriage onto the extruded aluminum beams, without having to make any adjustments. Instead of belts, the Deltaprintr uses 65lb Spectra fishing line to control the carriages, allowing you to expand the build volume later with very little cost.

As I mentioned above and perhaps most importantly the machine offers a huge 12 inch (30cm) printing height – the height of many household items that, to be frank, just wouldn’t be the kind of thing you would anticipate witnessing emerge from a more standard sized home 3D printer. Build volumes are, predictably, excitingly, getting consistently larger.

The Deltaprintr is also designed to be easy to scale: to make it taller, switch out the three aluminum towers for longer ones; to make it wider, you will need to switch out the top and bottom wooden piece, then get longer arms. The team will offer expansion packs after the Kickstarter crowd-funding campaign is complete — which is erring towards inevitability.

Every printer will be fitted with an automatic calibration probe, to ensure that the 3D prints stick to the bed and that the output does not warp when 3D printing. In addition, every 3D printer will also come with an LCD display and compact 60w power supply included.

The creators are asking for $195,000 by January 4. As I write, just days into the campaign, they have accomplished the not-so-modest sum of $100,000. The Deltaprintr team plan to begin shipping printers in July 2014.

At less than $1,000, the Deltaprintr is part of the 2013 flood of interesting, innovative, inexpensive 3D printers. But its stand-out feature is the all-important build volume – comparatively large – making it a model that may prove more appealling than most for a crowd-funded delta style 3D printer?

Whilst on the subject of delta-style 3D-printers, here are some alternatives. The links lead to varied webpages ranging from the sales sites of those printers that are available to purchase commercially and assembly instructions for those designed for home construction: 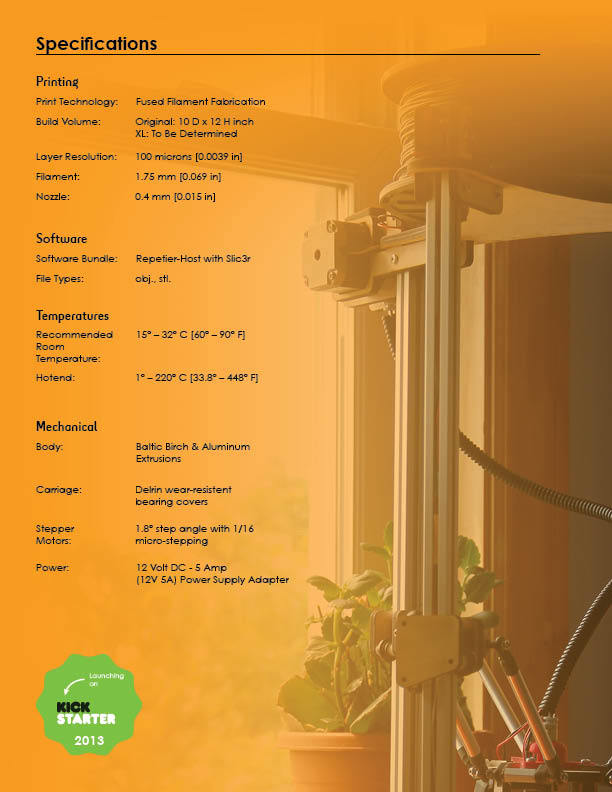