Thingiverse user Jeshua Lacock – aka 3DTOPO – has paid his respects to the kinetic machine artist Arthur Ganson with his latest 3D printing design and modelling work called Printed Machine with Concrete, which is available at Makerbot’s world of objects. 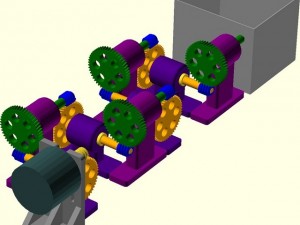 Jeshua has kept the same design language as well as the fundamental idea (and of course the name) behind the original piece – it consists of a system where twelve pairs of worms and gears are constructed in a way that each gear reduces the velocity by 1/50. In practice this means that if the first gear would be moving at 200 rounds per minute, the last gear completing a full circle would take 2 trillion years. Because that’s a somewhat long period of time (!), the final parts can be cast – for example, in concrete, hence the name of the piece.

Because credit should be given where it’s due, even the original artist has given his blessings to Jeshua’s work. Below is a comparative image of the og Machine in Concrete and the homage including the Printed prefix.

Even though talking about watching something in action would in this case be somewhat overkill, Jeshua has nonetheless created a video of the Machine doing its job. And as a disclaimer it is a relatively short video – i.e. instead of trillions of years it only lasts a minute and a half!