To mark the 10th Anniversary of RepRap, 3D Printing Industry is interviewing early pioneers from the RepRap project and others who continue to share their work through Open Source licenses.

Chris Palmer, aka Nop Head, was one of those early pioneers and helped many RepRap builders by supplying the 3D printed components necessary to construct a 3D printer. Nop Head also worked on (and shared designs for) many important features of 3D printers including auto bed levelling, metal heater blocks and much more.

In this article Nop Head discusses the early days of the RepRap project and topics including multi-material 3D printing. 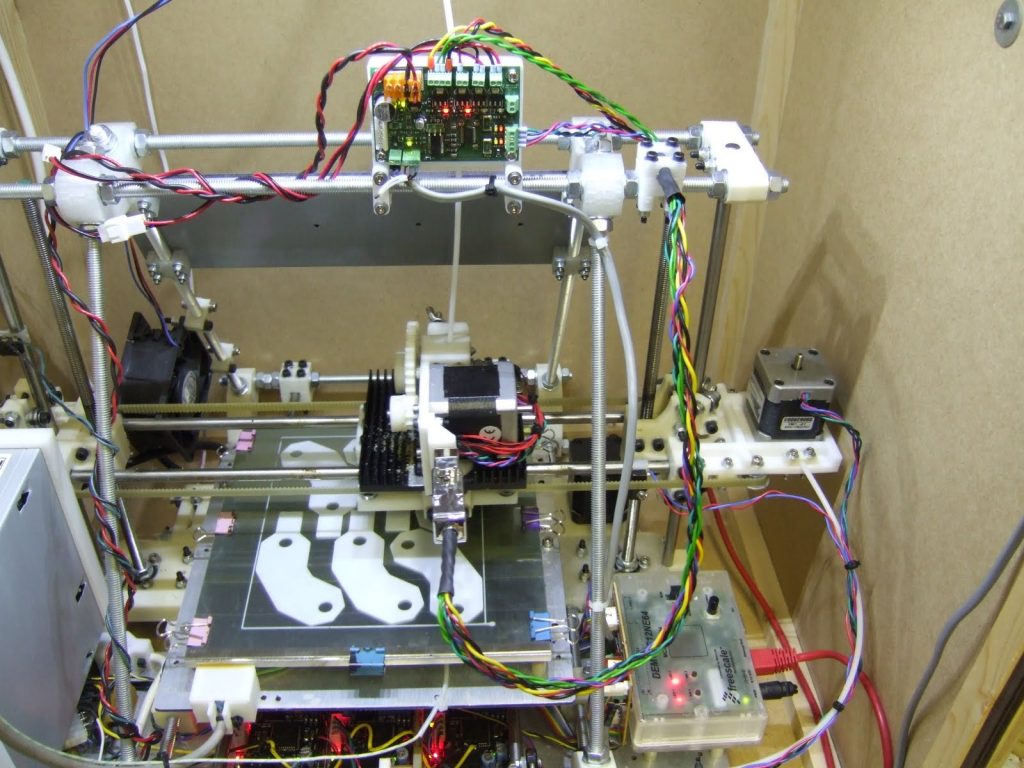 Michael Petch: How did you come to be involved in the RepRap project, please can you tell me a little about your role in the project?

Chris Palmer: A friend mentioned the [email protected] and RepRap projects to me in 2007. I looked at both but soon decided RepRap was more interesting. I read all of the RepRap blog that was started by Adrian two years before and decided to make my own machine and started to blog my progress here. I was inspired to blog myself by Forrest Higgs who was part of the RepRap team and had his own blog.

At that early stage RepRap hadn’t achieved self replication, so having no access to an FDM machine, I was faced with a chicken and egg situation. A lot of people were in the same situation and were improvising 3D motion systems with cheap materials. I found that I could buy precision CNC axes second hand on eBay for a few hundred dollars, so I cobbled a machine together using those and MDF sheets cut to size from a DIY shop. Initially I configured it as a milling machine and used that to make the extruder design Adrian had published.

After about a year I had a working 3D printer and my blog became famous in the RepRap world because I did a lot of experimentation and detailed all my successes and failures. I set about printing the parts to make a RepRap Darwin and at the same time tried lots of different extruder designs in order to improve reliability and quality. Because my motion system was very accurate and reliable from the start I was able to concentrate all my efforts on the extrusion process and soon was producing parts close to commercial quality.

I never completed the Darwin build because by the time I had a reliable extruder the Mendel design had been released so I built one of those in 2010. Everyone else was in the Chicken and Egg situation so Mendel printed parts were in great demand. From 2010 to 2012 I printed thousands of sets of Mendel and Prusa parts and sold them on eBay. I also supplied some kit sellers, including Adrian.

During this time I pioneered a lot of the things that are common in RepRap style printers today.

In 2011 I replaced the triangular prism frame common on RepRap machines derived from Mendel with some flat sheets mounted at right angles and called it Mendel90.  This made the machine much more rigid and automatically aligned the axes orthogonally. That changed the evolutionary path of RepRap and most subsequent machines like the Prusa I3 have this basic geometry instead of the prism. People started asking for full kits so in 2012 I gave up my full time job as an embedded systems engineer and my wife and I started selling Mendel90 kits to people all over the world. We did that for three years until it became difficult to obtain the DiBond in good condition and then I retired at the age of 53.

Michael Petch: What are your thoughts about how RepRap has developed over the past decade?

Chris Palmer: I think RepRap has totally changed the 3D printer market and brought about cheap 3D printers but the self replication aspect hasn’t worked out the way envisaged. The RepRap ethos was to print two sets of parts and pass them on, which I did. The idea was the recipients would build a machine and use it to print two sets and pass those on until the world was full of 3D printers. I gave a set of Mendel parts to a school and a set of Darwin parts to Open Source Ecology. Both requested them but I don’t think either set were built into working machines. On the other hand I sold thousands of parts and most of those did get built up but only a small percentage of people used them to make more 3D printers.

The people that did make use of the self replicating aspect where people like myself that used it to create printing farms for very little cost and mass produce parts to sell. Josef Prusa’s company is probably has the biggest example of that.

Michael Petch: Are you still working with 3D printing, what are you currently working on?

Chris Palmer: Since retiring I haven’t done as much RepRap development although I did publish some investigation of cooling ducts. I do use my 3D printers to make things all the time. At the moment I am making a lot of electronic bench instruments. I am also designing a multi-material 3D printer slowly in the background, a compact desktop CO2 laser cutter and adding a diode laser to HydraRaptor, so I am very busy. I will eventually publish those on my blog but it turns out E3D have made a very similar multi-head printer so they have got there first.

I also regularly print plastic solutions especially for the garden e.g. to fix solar lights to fence, magnetic hooks for garden tools, brackets to fix gazebo to the ground, etc.

Michael Petch: What is your perspective on the state of Open Source  in 2018 and is there still a need for OS projects?

I think Open Source is the future and there is definitely still a need for it. I use OpenSCAD to design and OctoPrint on Linux to run my Mendel90 printers running Marlin. All Open Source projects. Ultimately I think all human knowledge should be freely available, not behind paywalls and patents. I am against artificial scarcity.

Michael Petch: What is 3D printing currently missing, what would you like to see?

Until 3D printers work at molecular level and produce anything and everything I think they are lacking. I am currently focusing on multi-material FFF but there are many other 3D printing technologies to explore.

Currently RepRap machines need far too much human effort to replicate to spread exponentially as Adrian envisaged. They need to be self assembling because most people are not interested in putting something together themselves.

Read more in our 10th Anniversary of RepRap series.

Want to work in additive manufacturing or looking for a 3D printing job? Sign up for our free jobs service now.