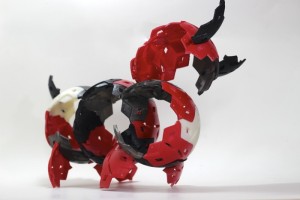 Three students from the City Park High School, Utah, U.S.A. students have created what they say could be the LEGO of the twenty-second century, which they call IKOS. Using desktop 3D printing, they have cleverly designed a new building block that manufactured from 100% recycled high-density polyethylene (HDPE) consisting of milk jugs and other containers. In essence the engineer students have built a modular 3D spherical puzzle with pieces that interlock and connect. IKOS is no mere constructional toy either, the user can actually create and build sculptures, desk organisers and light fixtures. 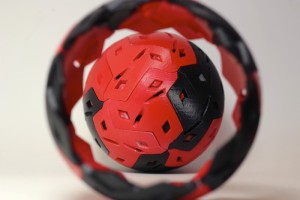 IKOS works by allowing two pieces to be slide together to form the basis of a construction methodology.  The user can build a spherical surface, and enhance the design by combining the IKOS pieces perpendicularly – the pieces will configure into literally thousands of different combinations.

“We are launching this design as a toy, but we believe that there are other humanitarian applications such as emergency shelters and water storage tanks. This design is scalable which we believe has use for a greater purpose,” team member Mina Berglund has stated.

The 3D modules are a refreshing idea, and certainly follow the analogy of the team by being akin to Lego. Personally I particularly like that the project respects the environment, using biodegradable PLA, as opposed to the far less sustainable ABS that Lego are still using. Below is a view of the construct form in a 3D viewer:

The students have completed their design and have filed for a patent and have found a source of recycled material in the United States to help the manufacturing process for their project. The team are seeking to raise USD$15,000 for a manufacturing tool and $6,000 for their first production round on their IKOS Kickstarter campaign which can be found here. I’ll leave you with the campaign’s cool video…