How can you Reduce the Noise of your 3D Printer?

Don’s previous experience with developing air filtration systems for a company he founded back in 1985 gave him an idea to create an enclosure that would fit over the LulzBot TAZ units ( including the TAZ 6 ). The LiteWorld Protective Enclosure is made from plexiglass with an aluminum frame and cooling fan and filter. The unit is 38” wide, by 32” high and 30” deep with two large access doors that are the width and height of the enclosure. The cooling fan can connect to a computer via a USB cable.

This simple but rugged enclosure allows for 360 degree viewing of the printer operation while eliminating the noise and keeping small hands from the hot moving parts. Since its inception in March of 2016 LiteWorld has sold over 10 units and is getting requests for quotes on a daily basis. All of the schools that use them are thrilled with the fact that they can run their printers anytime of the day without disturbing their classes.

Due to the high cost of the plexiglass, LiteWorld had to raise its price to $575.00 plus $35.00 shipping charge in the U.S. The system is relatively easy to assemble and the feedback from customers has been very positive. The units are fabricated in Indiana. 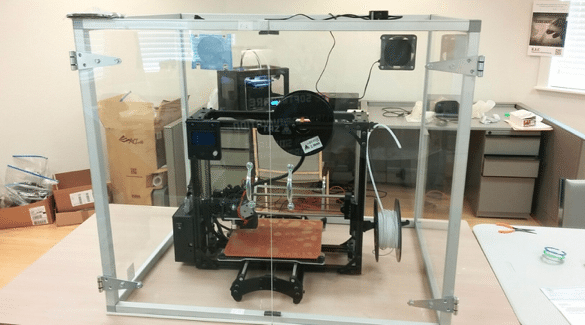 LiteWorld LLC was created in December of 2015 as the vehicle to promote 3D Modeling and 3D Printing in the greater Southwest Florida area. Don Musilli, President, had previously established the Englewood Incubation Center in August of 2012, a non-profit business incubator that was designed to help promote the development of hard technologies by putting 3D Printers in 15 of the local schools.

LiteWorld was developed to continue these efforts by showing people the value of 3D printing technology and the potential it has for the formation of new business ventures. By trying different 3D printers, LiteWorld selected the LulzBot line of TAZ printers as they proved to be very reliable and made for high usage applications. In March of 2016 LiteWorld became a Resller for LulzBot.

Many of the LulzBot TAZ units were in schools, from elementary to high school and some universities and they often were running during class time. In addition to the noise created by the printers the hot beds and hot extruder ends were considered somewhat of a safety issue especially with the younger students. Also, printing with certain materials like ABS or HIPS generated an odor and in small classrooms could become an issue.