Due to the growth of popularity and adoption of 3D printing tech in both private and work settings, it’s now a golden age for industry related professionals looking for profitable opportunities – i.e. for 3D rendering, 3D modelling and 3D animation experts. Well, at least if the analysis by Freelancer.com, the mix & match marketplace for companies and independents alike, indicates a valid truth.

If you recognize yourself as an expert in at least one of the aforementioned areas and were already changing the first number of the salary request in your job application draft, let’s first take a quick look at where this growing potential is actually evaluated to come from. Freelancer.com conducts quarterly analysis on online jobs, that results in a top-50 listing of movements and work areas with the greatest future potential. For this round – Q2/2013 – they went through 300,000 posted jobs and found that in trying to compete in the global innovation game driven by corporate giants, SME’s have had to actively reach out more to freelancers in order to keep themselves relevant and up-to-date –  without compromising a healthy balance sheet, of course. As a positive effect caused by this shift to using more freelancers and other non-traditional, more flexible workforces, it has also given SME’s more agile structures and organizations compared with larger companies – and thus a potential differentiating factor when creating innovative and disruptive products and services.

The outcome of the analysis that indicates booming potential for the 3D printing sector is based on a few notions, both factual and predictive. Freelancer.com mentions one of the signs being the recent Stratasys’ / Makerbot deal, assumingly indicating more buy-outs of smaller companies by bigger corporations in the future. This sounds perfectly reasonable and is something that has already been witnessed on a massive scale in the consumer electronics field among other areas of business – from the dawn of time, seemingly only limited by legislative laws regarding monopolies and other free market disruptions. For another indicator of the growing potential, Freelancer.com uses Forbes as an authority and refers to their early 2012 estimate of the 3D printing industry reaching a 3.1 billion USD value by 2016. However, the real beef in their press release is the aforementioned trio of jobs – 3D rendering, 3D modelling and 3D animation – all placing in Freelancer.com’s own top 20 categories of jobs listed with percentage-wise impressive growth figures (note: assumingly compared to Q1 results in the jobs listed for the respective jobs). I would have liked to have it more clearly written out if these growth figures in job postings were compared to Q1 or some other period, but an infographic is always relevant nonetheless– even without any axis labels(!). 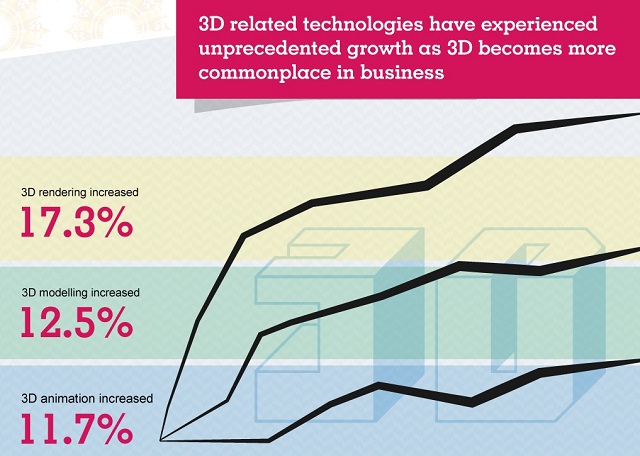 Besides 3D printing, the CEO of Freelancer.com, Matt Barrie, also underlines a second area where the money will move more and more in the future: “2013 will be viewed as a year of unprecedented disruption, with tectonic shifts in the design and manufacturing industries as they struggle to adapt to the unstoppable rise of crowdsourcing and 3D printing. But with disruption comes opportunity, and over the next couple of months there is a unique window for any  entrepreneur with an innovative business model to build a billion-dollar company.”

So, strong words and predictions, but what could actually be summarized and understood from the Freelancer.com’s views and perceptions related to the 3DP industry in general (not even going to the crowdsourcing topic)? First of all, there is little evidence of thorough analysis, and clarification and transparency seems to be lacking too; but as a company looking to grow their own business – that of connecting freelancers and companies – this type of report naturally has other purposes besides providing pro bono information for the likes of us. No harm in that, per se. But as for the conclusion of 3DP itself solely driving the expanding usage of freelancers in the 3D modelling, rendering and animation world – I remain to be convinced.

Without a deeper look into the data used (the listed job positions), I would assume that other, also growing industries with their heads deep in the 3D pool are also strongly responsible for creating job opportunities around it – for freelancers as well as traditional employees. Just to name a few, the movie and film industry, the consumer electronics and applications field in both HW and SW sectors, industrial applications and services and several others from all walks of business life are applying more and more 3D related projects into their offering – for the public as well as the tools used internally for increased productivity and efficiency. Just as this applies to the global corporate giants, it is a factor that can’t be ignored by SME’s either, but in my opinion the question is more about the disrupting change in the bigger picture.

The traditional paradigm of working in a modern factory i.e. the office from nine to five is scattering and new forms of what can be defined as a ‘job’ are emerging all the time. Even forgetting the reasons and motives driving this change, it’s quite obvious that companies like Freelancer.com are in for some lucrative business years ahead – let’s just hope that the new creative professionals also benefit from all of this (and that 3D printing will actually be one of the key driving forces in creating  future jobs).