Crowdfunding & The Low-Cost Desktop 3D Printer: A Suicidal Race To The Bottom? (Part 2)

Part 1 of this series presented an introductory view of crowdfunding vis a vis 3D printer start-ups and the dynamism, democratization, distortions and dangers this new and novel mode of bankrolling for start-ups engenders.

I began this examination of how aggregated venture capital — delivered up by variegated multitudes via online platforms coalescing mostly small contributions — was remaking the means of funding tech- and creativity-based entrepreneurship. And, thus changing the rules of how such new businesses are being planned, positioned, conceived, built, fostered, marketed and managed.

As I suggested (and will continue to showcase and demonstrate in this series), crowdfunding — applied to lower-end desktop 3D printers — is a double-edged sword. In the hands of some expert entrepreneurs, it is a great and miraculous “weapon” to advance the quick, often unprecedented, advance of newly founded businesses with compelling concepts and strong commercial leadership. But not all.

Many of these 3D printer launches would have never been birthed in pre-crowdfunding days, let alone grown so rapidly to healthy — sometimes overweening and/or obstreperous — business maturity. For (relatively) rapid and healthy growth, think Printrbot and Formlabs (both of which, it should be noted, were among the earliest to the 3DP crowdfunding game).

The entrepreneurs involved in these remarkable marketplace triumphs deserve triple “Kudos.” They have managed to simultaneously braid three business vectors together by:

However, on the other edge of that sword, it can get messy. Indeed, it is no wonder that some of these efforts have gone seriously awry…even with the best of intent behind them! Business Vectors #1 and #2 used to be challenging enough — especially in volatile combination. Now, sadly, we’re seeing compelling evidence that some players are gaming Vector #3: the crowdfunding systems.

Kickstarter (KS) of Brooklyn is the very-young “granddaddy” of crowdfunding sites. At just five-years-old, it is barely a commercial kindergartener to the hoary venture-capital business. However, you can instantly grasp its dominant position in the sector it pioneered by virtue of the fact that its corporate name is now the action-verb of the segment. (Even if you’re IndieGoGo, your clients still see you as “kickstarting” their businesses.)

KS — since its own founding in 2009 — has engaged with over 100,000 entrepreneurs and their “projects.” More than 65,000 of these KS clients achieved their (self-selected) funding/timing goal at which time KS releases the funding to the project’s start-up and then the games (gaming?) begin! 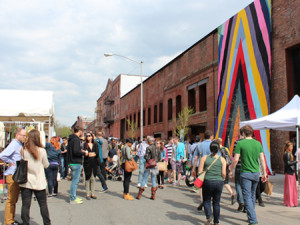 A couple of weeks ago — for a World Maker Faire NY 2014 “Town Hall” meeting — I visited Kickstarter’s cavernous new HQ in Greenpoint/Williamsburg, NYC. Although for “new” you can read “outré-&-outtahere” rehab of another industrial derelict space in post-gentrified Brooklyn. To complete the success-sucks ensemble, a glowing-white — with a frisson of St. Elmo’s Fire blue — Tesla sat (hummed?) nonchalantly at the gloaming-lit curb out front. (Hey, I biked over from DUMBO…)

As an aside: the local industry — still-extant woodworking — is one of Brooklyn’s 3Fs: Food, Fashion & Furniture. Say, booming NYC needs a lot of high-end, custom kitchen cabinets for those Golden Toadstool high-rises popping up everywhere a corner gas-station or waterfront brownfield used to be…sung to the tune of “Pending (Cash-Outs) From Heaven!” 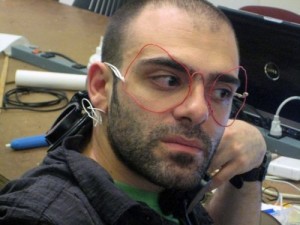 During conviviality-confabbing post the Town Hall, I met and exchanged with Kickstarter’s John Dimatos — Project Specialist for Product Design & Technology — our KS’ SpokesHost of the evening. (To underline the hand-lettered nature of Kickstarter’s public persona, John had earlier addressed the crowd off-the-cuff —if his T-shirt had sported such starchy features — while barefooted.) We talked about KS’ing 3D printers…

To understand Kickstarter — and its position vis a vis 3DP-driven clients and their would-be-funded “projects” — keep firmly in mind that KS is an ONLINE business. Its employees’ business cards contain no titles, no phone numbers, no physical address. On one side the card acknowledges that, indeed, this person is associated with Kickstarter. And, you get the corporate tagline: “Bringing creativity to life.” (This positioning statement can be parsed in a number of colorless and un-instructive ways…) The other side presents the employee’s (presumably!) name and his or her email address. That’s it.

As an operational goal, KS would seem to drive client interaction — as much as possible — through their Web site interface. (Much of the orientation, direction and support for KS clients is unabashedly DIY: via KS’ on-site “Creator’s Handbook.”)

Try as I might, I have been unable to find a phone number to simply call the company. Well — as a journo — one does seek a little more personal contact. You might make a relationship and thus become connected enough to tell the most appropriate story for everyone’s benefit: company, client, the client’s present and prospective customers, general public… You know, do my job…

So — to tell Kickstarter’s story around 3DP — I’ve had to rely on brief in-person discussions and email exchanges. Still — alas — nothing can be on the record. So, I must augment with third-party input…and try to triangulate enough to get the facts right. Gad.

Via KS’ online system, statistics SHOULD be simple to acquire and parse. IF it’s ALL online, then it’s been input via the Web — mostly by clients who have an incentive to get it right. So, it’s in the KS Cloud: searchable by specifics and susceptible to Big Data mining. That said…it’s NOT. Or, stats to illuminate questions and concerns — how about buttressing customer support? — have not apparently been formulated from the data that does exist.

Now, educated estimates put the number of organizations making desktop 3D printers today at about two hundred worldwide. The bulk of sales within this community will be for printers under $10,000 in price. These sales are further dominated by a low-cost category of $100 to $500 and a prosumer category of $500 to $3,000 per printer.

Kickstarter — ascertained via various reliable means — has had a major influence on these two categories of desktop 3D printers. One available list reveals 24 printers KS’d from early on (starting with Printrbot?) and another list shows 94 projects tagged as belonging to a “3D Printing” subcategory—without a definitive breakout of which are actually printers. (As you know from Part 1 of this report, eight 3D printer projects are “live” on the KS site right now — and I’ve managed to confirm that number. Although, a couple of these have a mere few hours left to run at time of publication.

Kickstarter is a paradigm-creating phenomenon. It is continuing to vastly influence 3D printer entrepreneurship, by virtue of its very invention of, and success in helping create, startup successes via crowdfunding. And, as previously stated, KS gets both credit and criticism for “the dynamism, democratization, distortions and dangers this new and novel mode of bankrolling startups engenders.”

In Part 3, already underway, we’ll take a look at some specific examples of the “distortions and dangers” incumbent to this KS process at work in our 3DP sector…