Could Apple be the Saviour of the 3D Printing Industry?

Matt Cildeman, investor and Seeking Alpha contributor, appears to have a thing or two to say about Apple and 3D printing.

After previously having written an article recommending buying 3D Systems stock last year, Cilderman appears to have changed his tune about the industry as a whole. When he wrote the article, 3D Systems had a market capitalization of $1.5 billion; in about a year, its market cap had more than doubled to almost $3.2 billion. He now believes that 3D Systems and other 3D printing companies like Stratasys Inc. (SSYS) are in a bubble.

Wohlers Associates, the leading authority on the 3D printing industry, recently noted in their 2012 State of the Industry Report, that sales of personal 3D printers, slowed noticeably in 2012. 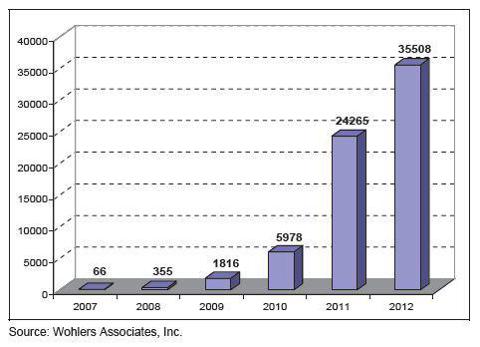 Cilderman clearly believes that overall growth is stagnating as the report goes on to say: “Growth of the low-cost (under $5,000) “personal” 3D printer market segment averaged 346% each year from 2008 through 2011. In 2012, the increase cooled significantly to an estimated 46.3%.

Many other contributing factors appear to be affecting the industry including the unregulated nature of online 3D model portals and the possibility of IP/copyright litigation.

Cilderman offers what could be a saviour for the 3D printing industry though, and he believes that saviour could be Apple. His reasoning is as follows, “Due to piracy, the music industry saw its profits shrink. Then, Apple dragged the record labels, kicking and screaming, through an industry transformation to a new, profitable business model. Apple, using the example of the music industry and its own reputation as leverage, can convince companies to sell their designs/digital rights management [DRM] files in Apple’s Online Store … or lose money to piracy and waste their time with a bunch of lawsuits.

Citing the fact that an Apple 3D printer would be potentially made available through their physical retail stores, the benefits to consumers would be huge, allowing them to see hardware in action and have access to an ”Apple Genius” to help with any issues.

Cilderman appears to believe that though Apple is not actively losing money, revenue will shrink, due to increasing competition from the likes of Samsung and Windows Phones plus a lack of leadership and vision from current CEO Tim Cook, after the death of Steve Jobs. It is his assertion that the company needs to move into another business sector rather than continuing in current PC/Phone/content delivery/software business

He notes, “It is my belief that personal 3D printers will eventually become as ubiquitous as tablets, and I think they provide a tremendous opportunity for Apple to return to its growth rate of the past few years”

Combining all this with the fact that apple has a vibrant and very profitable online store with over 575 million accounts linked to credit card numbers, Cilderman paints a picture of a company perfectly poised to pounce on the emergent 3D printing market.

A point to note though, analysts opinions are exactly that, opinions. Markets are volatile and large corporations have long term plans which are not usually revealed to anyone apart from board members or others on a ‘need to know’ basis. No-one has a crystal ball, especially in such a new and rapidly evolving sector like the 3D printing industry. Before considering any investment, do your due diligence, research and never rely on one point of reference.