Carter Lee is a 2nd generation Chicago based jeweler and years of working in a hyper-concentrated venue like Jewelr’s Row only served to show him how little has changed compared with the compelling advancements in personal manufacturing. It was this realization that served as the impetus to combine the entrepreneurial and creative sides of his personality to found the Chicago Charm Company. Starting a jewellery business has never been an easy undertaking — the industry is established, customers tend to be loyal in their patronage and that makes it difficult to grow a customer base if nothing new is brought to the table. 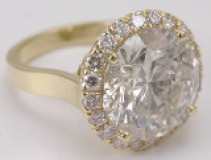 Carter was more than aware of the challenges he was facing: “The traditional method of creating jewelry involved multiple steps. It could take weeks before a project would come to fruition. There were clues that emerging technology could bring higher efficiency, less waste, a better product, and above all else ending the communications gap between the client and designer. I’ve spent a lifetime in and around the jewellery industry, and while it’s commendable to stay with tradition it’s equally important to seek and explore and push.” 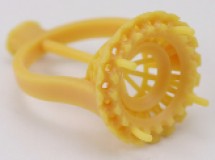 Having spent years creating jewellery the traditional way was something that worked for him and past generations — up to a point — because the old workflow for custom-made, personal creations reached certain limitations and has remained stagnant for the longest time.

The earliest 3D design software packages were limited and mostly derivatives of tools used by industrial and mechanical designers. Jewellery designed using this early software looked as if it belonged more inside a transmission case than on a finger. “Thankfully, the tools have evolved and new ones introduced to let jewellers be as expressive as their abilities can carry them.” With that, Carter began the journey of using the new workflow. Designing in 3D permits countless opportunities to non-destructively explore variations or make changes according to each client’s individual needs.

It’s one thing to design jewelry in the virtual world of the computer but to transition it into the real-world requires another crucial component, the machine. Machines that exhibited the level of detail needed by jewellers had mostly been within the exclusive reach of well-funded service bureaux. “All my early 3D printing projects were sent to various service bureaux, but it quickly became apparent that this workflow wasn’t sustainable,” Carter explained. “It’s like deciding the copy-shop is still the proper venue for laser printing in today’s environment. It wasn’t just about the service bureaux’ soaring print fees,” explained Carter, “that disconnect introduced all sorts of back-and-forth.” He concluded that securing his own 3D printer was imperative.

The Move to In-house 3D Printing

At the time when his 3D design, modelling and sculpting abilities coalesced, personal 3D printers began emerging and became considerably more attainable. Which one was right though? Carter and many of the bench jewellers he knew took pride in curating their workbench tools to perfectly match their needs  — “Focus on choosing the best and you’ll only have to buy it once. Buy cheaply and you’ll often end up buying a 2nd time.” 3D printers are no different in this regard. 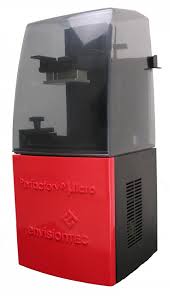 Carter had been aware that among the 3D printing systems that service bureaux used, those that deployed the envisionTEC Perfactory resulted in models that best withstood handling while providing astonishing, ultrafine detail. This, primarily, made the Perfactory Micro 3D printer a landslide decision for Carter. Although another consideration included the list of materials developed specifically for jewellery applications with burn-out characteristics that show maturity. This in turn lends to familiarity and consistency among casting workshops. Other factors like the accessibility of tech support, software and reliability also weighed heavily on the decision to go with the Perfactory Micro. envisionTEC also offered Carter two days of hands-on training at either its California or Michigan facilities, which proved invaluable in terms of learning to configure the machine, fix model geometries, generate supports and understand best practice procedures. Altogether these days provided Carter with the solid confidence that his 3D printer would start producing the moment it was plugged into his design environment. “In retrospect, slowly acquiring all that knowledge through months of trial and error when simultaneously running a business would’ve been nightmarish.”

With the printer decision confidently locked, Carter now spends his time focused on design rather than mired in continuous tweaking and fixing. As an example of how 3D printing shines over previous subtractive manufacturing methods, an associate jeweller asked Carter to design a fortune cookie charm. The folded geometry introduces hollow regions that would otherwise be impossible to cleanly access with a CNC mill. Not only can a 3D printer make a single, unbroken object in one pass, the object was successfully direct-cast with ease. That’s labour, time and material saved in one fell swoop. “When I show this process to fellow jewellers, you can see their eyes widen and their minds blown,” says Carter. “I’ve demonstrated the cookie charm was a cast-ready model within a day of inception. When that light-bulb moment hits they start thinking about all those countless projects they previously couldn’t do. With this advantage, I plan on bringing charms and all manner of jewellery that standout from the crowd.”

“Approximately a month into owning my printer, envisionTEC developed some improvements to the Perfactory Micro. In an unexpected move, they offered to ship out a replacement to existing users and picked up the tab for return shipping on the old machine. I’m not sure that those other candidates would have been as dedicated to refining their product. Looking back at this journey, it’s gratifying how the printer fit so well into my workflow. This is especially emphasized when observing the issues other 3D printers are still trying to work out. Like many of the other tools at my workbench, the Perfactory Micro has proven to work astonishingly well and reliably whether printing models for my own clients or associates. It’ll be the most important part of my business’ equation through the foreseeable years to come.”

Although an increasing stream of fellow jewellers and new clients continue to seek Carter to help bring their projects to fruition, he’ll try his best to carve out moments to post his progress and experiences on his website, which is not yet live but should be coming on line soon. Keep an eye out for it: www.chicagocharmcompany.com