Can we turn asteroids into space ships?

Made in Space has revealed an audacious plan to turn asteroids into giant autonomous space ships that will ferry supplies to far off mining outcrops.

It really does sound like something out of Star Trek, but RAMA (Reconstituting Asteroids into Mechanical Automata) is really a thing. It has already received Phase 1 funding from the NASA Innovative Advanced Concepts programme, which means the company gets $100,000 for a nine-month feasibility study. If everything looks good, it can apply for $500,000 to fund two more years of research.

Taking on the final frontier

Made in Space is looking to push back the frontiers and now has a commercial grade 3D printer on the International Space Station. It wants to supply NASA and the research scientists on the ISS with small parts, but it clearly has grander ambitions.

So does the world at large. The European Space Agency announced the lunar village recently and Elon Musk is looking to colonise Mars with Space-X. There doesn’t seem any doubt that we’ll have access to new minerals and mining opportunities in the years ahead, but supplies will be an issue.

“Today we have the ability to bring resources from Earth,” said Made in Space CTO and co-founder Jason Dunn. “When we get to a tipping point where we need the resources in space, though, then the question becomes: ‘Where do they come from, how do we get them and how do we deliver them to the location we need?’ This is a way to do it.” 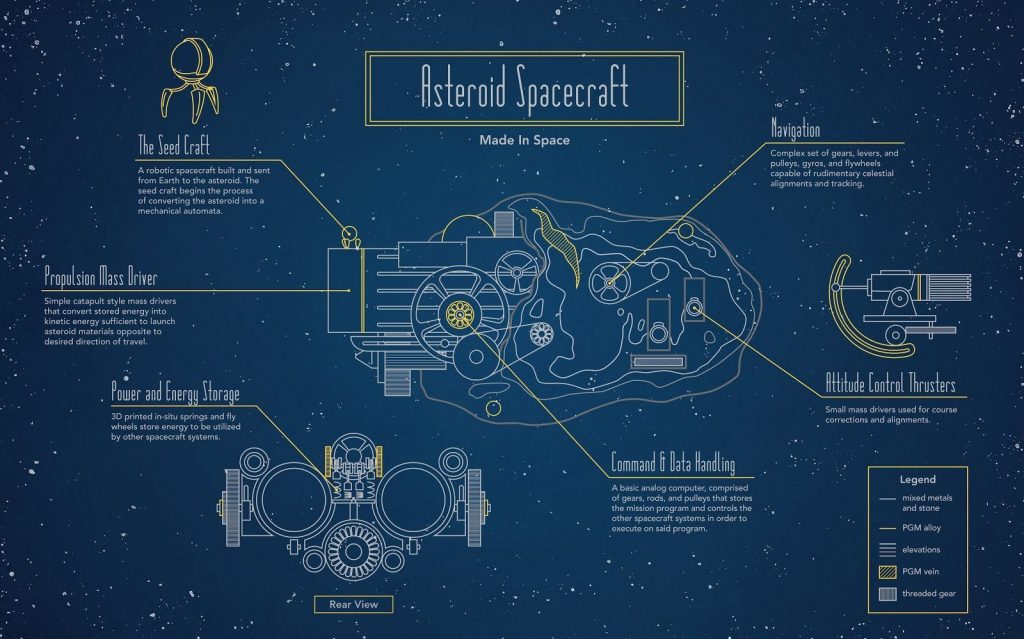 Are seed craft the answer?

Made in Space will essentially send ‘Seed Craft’ that would latch on to near-Earth asteroids. The idea is for the craft to take raw materials from the rock itself and 3D print on the fly. The autonomous printer will construct propulsion, navigation and other systems that could turn an asteroid into a working supply ship.

It would be a huge drone that could be programmed to head to far flung corners of the solar system and would be much more efficient than a separate launch for each and every supply operation. It would still have to rendezvous with a supply ship, however.

Made in Space is considering using age-old technology, including analog computer systems and a basic propulsion system. Autonomous 3D printers, as well as mechanical computers comprising printed parts, are already with us. So this part at least, we know is feasible.

As the asteroid will never have to break free of the Earth’s atmosphere, the actual system required to guide it through space would not have to be so powerful or advanced. The concept of bouncing rocks off the surface of the asteroid with a mechanical catapult to send the whole vessel in the other direction sounds like it might be taking the stripped down concept a touch too far, though.

It all sounds several steps ahead of where we are right now and realistically it is. Dunn said himself this concept could take 20 years to turn into a reality. Project RAMA could cut its teeth closer to home, though, with 3D printers creating increasingly complex machines and even buildings without human intervention as a series of ‘dry runs’ for space travel. In the process, they could easily solve major infrastructure and housing issues in remote areas.

The future is nigh

Made in Space has just established itself on the ISS and now is considering its next step. Vast supply ships made out of asteroids might not be the final answer at all, but it’s intriguing to see just how the greatest minds are looking at space travel as a viable and almost everyday occurrence.

We’ll have to wait and see if it turns out to be right.