There are a few companies that I credit for opening up the world of 3D printing to me: one of them is Mike Littrel’s CIDEAS, a rapid prototyping service from the Chicago area that was among the first to show off four of the main 3D printing processes (PolyJet, SLS, SLA, and FDM) in clear and easy to understand videos.

After being among the first to understand the mediatic appeal of industrial 3D printing, now CIDEAS is getting ready for the next phase in AM evolution, in which consumer trends affect professional tools, making them more accessible, complete, and appealing to a wider demographic. That is what the company has done with its new True-Quote real-time quotation engine, which is launching in early May and is probably the most advanced such tool now on the market.  And, CIDEAS has further expansion of the platform scheduled to be implemented, make the possibilities nearly endless. 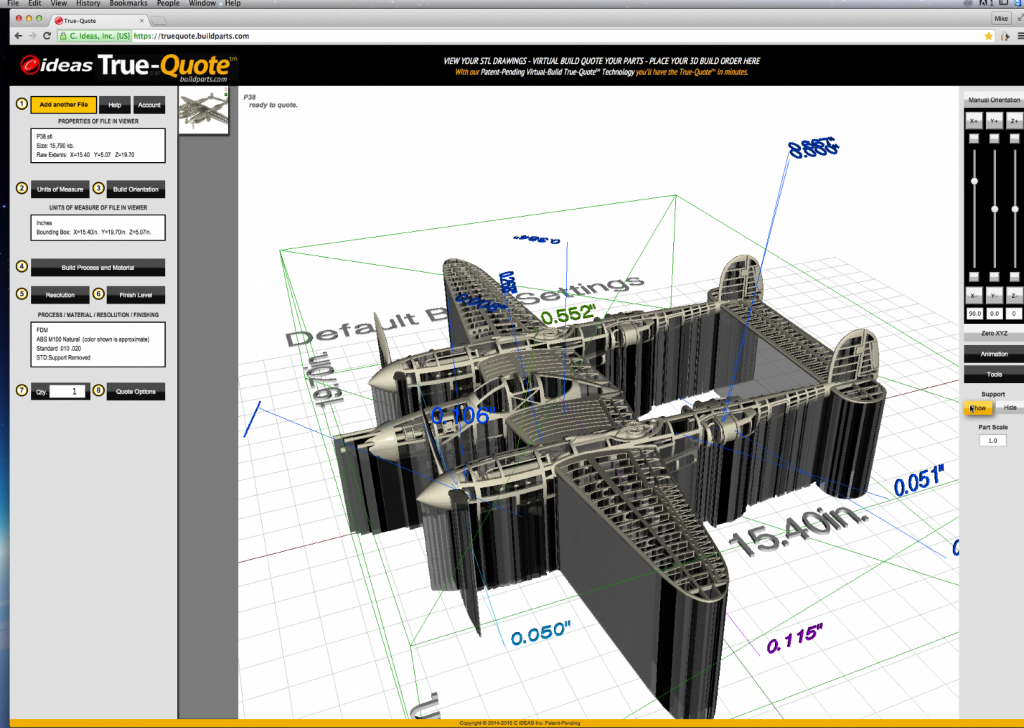 Although Mike stressed that, during the development process, they did not look at any other competing engines, in order to come up with something totally new, True Quote takes the more consumer-friendly approach offered by companies such as Shapeways or even Fabnami and combines it with the extensive professional-grade possibilities offered by leading RP services, such as Stratasys’ RedEye On Demand Rapid Quotes. The result is that users have an advanced visualization system, which lets them determine, in real-time, what is the best technology, material. and, in particular, the best position on the build platform for their parts. CIDEAS intends to both use it internally and license the True-Quote engine for use as OEM by other services and for research by RP labs as well.

“Current quote engines just did not offer enough options and many services end up preferring to do the quotation by hand, on a single case basis, especially if you have to determine the cost of specific quantities instead of a single part, even more so if you need different quotes for different quantities,” Mike explained. “The result is that it is a lot more time consuming and complex to do. It is simply no longer compatible with the growth rate of the AM industry.” 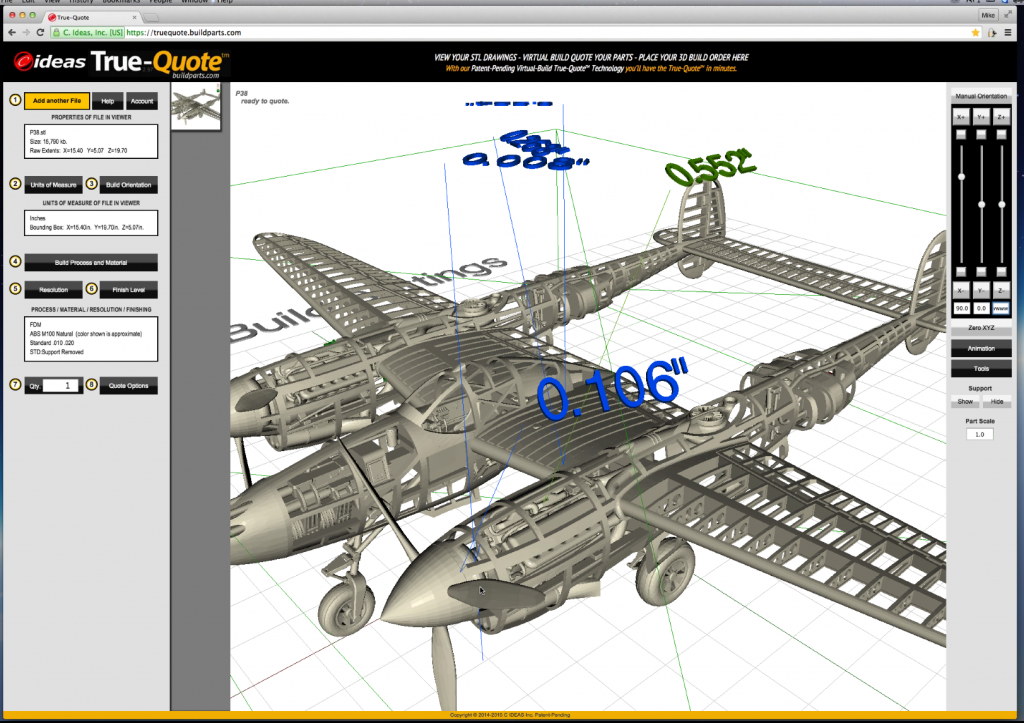 Mike and CIDEAS looked into developing their own quote engine several years ago; however, the costs were just too high. About a year ago, they hired an internal developer who was not from the industry, but was able to get full support from and leverage the CIDEAS team’s combined 120 years of experience working with AM on demand. The developer had the ability to work with their wide variety of different machines and technologies and was able to come up with a very powerful software tool.

The desired component’s STL can be imported and is visualized in real-time 3D. Used with FDM, PolyJet and SLA technologies, the system is able to accurately calculate the option with the least support necessary and give a price quote in a matter of seconds, for each possible angle at which the part could be 3D printed. Mike showed me a couple of examples with FDM and the price of the final part changed radically with the angle and, thus, the number of supports. The level of accuracy is impressive, which is of fundamental importance when working with high-level industrial prototypes. SLS is also an option and, since powder-based 3D printing does not require supports, CIDEAS’ engine is able to optimize costs by reducing the amount of powder that can be recycled.

Quantity and finish options are also included. Once the part has been uploaded to the server, changing from one technology to the other for the same part takes even less time. “Quoting a part as complex as this would have taken me at least 45 minutes, with this system it only takes a few seconds. Then you can just get your quote as a PDF, print it or email it to yourself.” 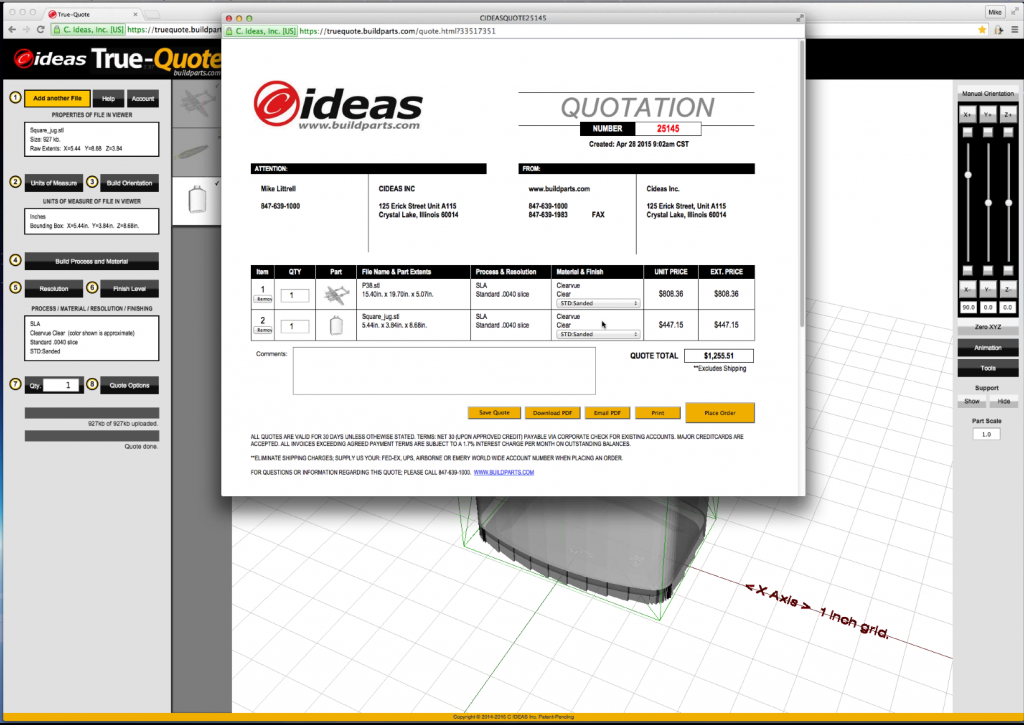 Mike uploaded and quoted several models: a highly complex model airplane, a zeppelin structure, and a bottle, but the most complex model – an engineer’s nightmare as Mike described it – was a casing with a squared-off side, which would require supports everywhere. In this case, I literally watched as the quoted price went from over $8,500 to below $5,000, just by repositioning the component inside the virtual build box. Further possibilities included: new technology and materials, as well as the possibility of scheduling the job in order to maximize each 3D printer’s available space on the build platform over time.

The added possibility of changing the size of the object being quoted in real time is particularly significant of CIDEAS’ effort to reach a wider demographic with its engine. While a company generally needs a specific size for an engineered component, a modelist can opt for a smaller size in order to save on final costs. The next generation of AM is going to make a professional’s work easier and a consumer’s work more professional.  And the True-Quote engine has been built for this. 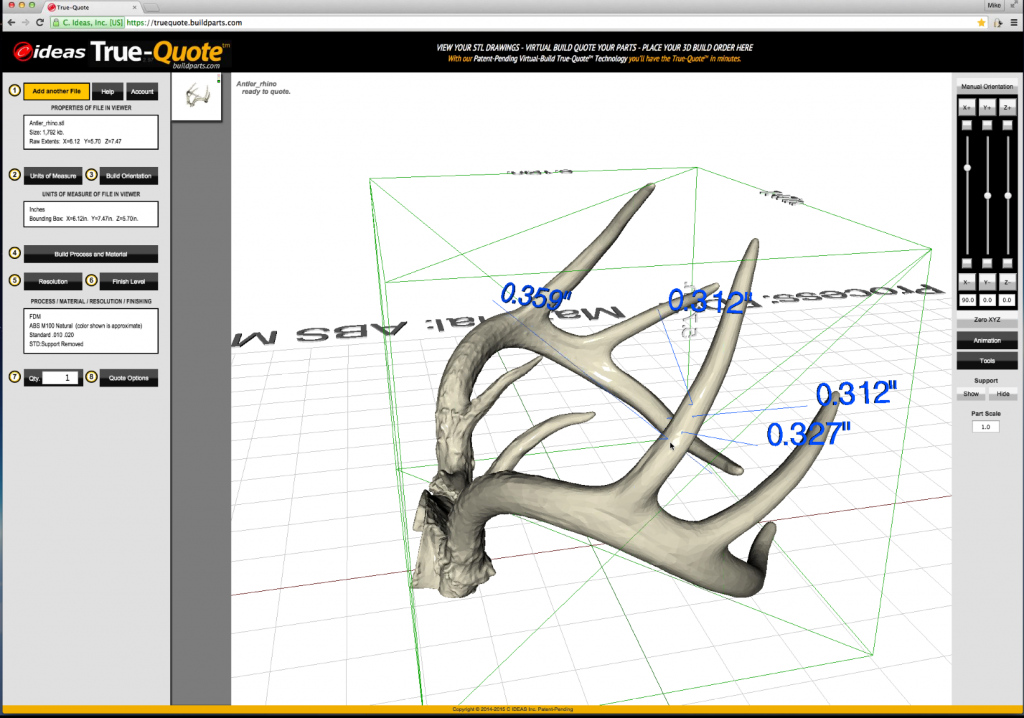