A better way to fit prosthetics

ProsFit hopes to make the life of amputees around the world that little more comfortable with a new 3D printed socket that has full medical approval in a number of European countries.

Alan Hutchison runs the company with his son Christopher, who lost both his legs in an accident in 2009. The pair were both frustrated by the slow and relatively wasteful process to fit Christopher’s prostheses. So they decided to find a better way.

3D printing made it possible

With a background in industrial business development, Alan was well placed to take charge of a project that simply would not have been possible without user-generated innovation and great strides in 3D printing technology.

They put in four years of research before founding ProsFit in 2013. Now, just three years later, they have unveiled their creation to the world.

The old way is not the right way

There’s no doubt that the traditional way is just tortuous. Several separate visits to the prosthetist are required over the course of one month, or even two. On the first visit the patient is evaluated and fitted for a temporary socket, which is never perfect.

That takes one more visit to fit and it is quite common to have up to five more fittings.

Pistoning is a painful problem

It’s rarely a perfect fit and the patient can endure all kinds of problems. Pistoning is a real issue, which is when the leg slides up and down in the socket as a result of a poor fit. This creates a repetitive impact that can lead to ulcers, infections and bruising. To add insult to a significant injury, traditional prosthetic legs can cost up to $30,000 and they wear out in as little as five years.

The socket has remained largely unchanged for a long time, too. So ProsFit was determined to create an entirely new system for fitting below-knee prosthetic legs that is more efficient, offers a better result and saves money. They turned to a 3D scanner and 3D print process. Then they effectively created an App for that.

Any scanner will do

Most 3D scanners play nice with their PandoFit software that is a modified 3D CAD program. With this one program the prosthetist can create the socket and design the entire prosthetic socket and limb with just one fitting. Technically the patient doesn’t even have to attend. They can organise the scan themselves and order their socket from within the app.

The team at ProsFit can then produce the socket within two days and the first prototype is the final product. This cuts down on a massive amount of waste, cost and inconvenience. The prosthetist can still make minor adjustments to help the patient get comfortable by warming the thermoforming plastic and reshaping it to fit with one consultation. The whole process is up to 75% faster than the traditional method. 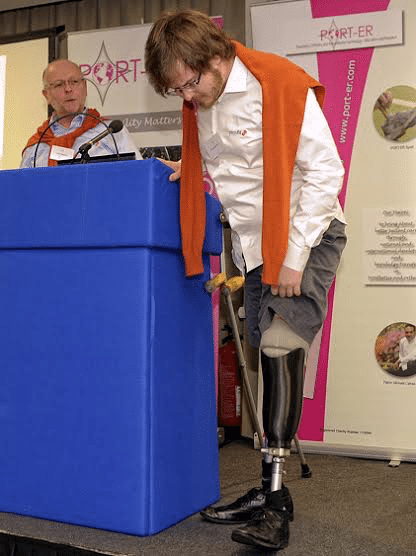 ProsFit supplied sockets to patients on an informal basis in 2014 and started clinical trials shortly afterwards. The devices have now been medically approved through Europe and the company hopes to take them to the rest of the world before long.

The whole process can be carried out online, which will empower the patient to get the prosthetic they want. It also means people in remote locations can actually get the prosthetic they need without travelling a long distance. The company has signed a deal with Handicap International, which looks after disabled people in remote and difficult locations.

Making a difference in a warzone

They include Syria, Togo, Madagascar and other places where high-quality prosthetics simply aren’t a priority. In these deprived and war-torn nations, a quality prosthetic can be the difference between life and death in the long run.

The company recognises, too, that wearers can be sensitive about their prosthetic limb. The traditional socket design can impact on their self-esteem, as well as their physical wellbeing. So it developed the ‘Original Plus’ line, that allows the customer to personalise their prosthetic socket with a unique design that gives them a sense of power over their disability and makes them feel less self-conscious.