Fed up with the limitations of RepRap printers, the founders of product development firm Acuity Designs decided to see if they could design and build their own precision additive fabricator. It turns out they were pretty good at it.

That was more than six months ago and now, after a series of successful prototypes, they are running a Kickstarter campaign to fund the production of Helix, a 3D printer that is looking to up the ante in terms of speed and precision for consumer 3D printing.

Acuity Design has already invested more than $70,000 of their own money in Helix and is now asking the Kickstarter community to help them raise an additional $95,000 to bring this 3D printer to market.

What sets Helix apart from other consumer 3D printers? Well, there are a couple of things, specifically its one-of-a-kind Exact Retract extruder and its lead-screw driven Cartesian gantry. These two innovations work in chorus to create a system that the guys at Acuity have named PAFT or Precision Additive Fabrication Technology.

PAFT enables Helix to push and pull filament without the slipping or stripping that plagues most consumer models. Since Helix is not reliant on a belt to move the print head, it can print up to twice as fast and with three times more precision than typical belt-driven 3D printers with traditional extruders.

What this all adds up to is a machine that can articulate movements as tiny as 4 microns (.004 mm) and that can move at speeds up to 350 mm per second. This precision allows Helix to print reliably at speeds of 200 mm/s with layers 100 microns (0.1 mm) thick.

Below is a further (time lapse) video release from Acuity which demonstrates the Helix dual extruder functionality. It is printing in ABS (blue), supported by HIPS (white). 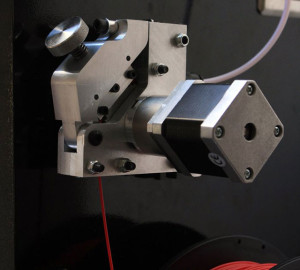 Since the designers of Helix are well versed in the demands of industrial product design, they outfitted Helix with a generous 30 litre build volume and a suite of software and firmware calibrated for multi-material prints. Sensitive to the needs of designers working on a wide spectrum of projects, Acuity has also made sure that Helix can print with ABS, Taulman nylon, PETT, PLA, PVA, HIPS and polycarbonate.

Furthermore, Acuity has done consumers the extra service of including an LCD click wheel display on the front of the Helix 3D printer that empowers users to load and initiate prints without needing to be tethered to a computer. This level of autonomy, in addition to quoting low annual operating costs, make Helix one of the most promising products to emerge in this latest wave of consumer-friendly 3D printing. But, as a note of caution, we have heard this story before, and until it moves beyond the marketing of a Kickstarter campaign and into the realms of reality, we cannot know for sure how it will all pan out.

This is not a low-cost machine either – pointing more to a “you get what you pay for” philosophy. You can pledge $4,750 to get a pre-production Helix system. This is $2100 less than the proposed RRP.

Committed to their belief that equipment should never limit creativity, Acuity has resolved to be a part of the Open Source Initiative and will make all their designs available to the public after the company reaches production readiness.

Colin Archdeacon is a multimedia journalist based in New York City. After a five-year stint in the film industry, Colin now devotes his time to reporting on science and health issues. Colin has an innate curiosity for technology and a passion for how it can be leveraged to transform society.