A New 3D Printer From The North – miniFactory

Yet another 3D printer has emerged, this time from the far Northern corner of Europe. miniFactory is a Finnish 3DP company, who offer their namesake 3D printer for northern maker enthusiasts for 790€ (approx. $1,030 | £638), which for that price comes fully assembled. The printing hardware itself is quite small, yet not timid in any way. Watch a time-lapse video of miniFactory creating a (PLA) plastic octopus below.

Besides PLA, miniFactory can process other materials as well – including Laywoo-3D — to print parts and products. But as a Finnish company, the mandatory Nokia reference needs to be made at some point – for miniFactory it was 3D printing the frame of the new Lumia 920. This project was developed for two reasons. First, to have the actual mobile hardware for graspable touch-and-feel evaluation before the launch (back in September) and secondly, to push the miniFactory to its limits, as the height of the Lumia 920 requires going to the maximum capacity of the 3D printer’s Z-axis.

The actual outcome did fulfil both of those goals. Even though the 3D printed ‘phone’ isn’t accurate regarding the placement of buttons, camera lenses etc., the frame itself looks quite nice. Have a look at the results below – with a screenshot of the WP8 UI to compare. 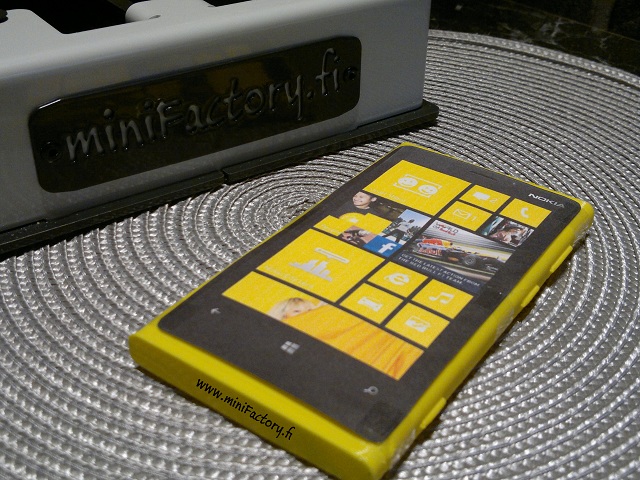 Beyond highlighting the impressive results from this relatively small 3DP company, which can of course be replicated by users of the the machine, it is great that new businesses in this sector are emerging from all corners of the world, even here in Finland.