A Light with Model Solutions

Riegens is one of the largest lighting manufacturers in Scandinavia, with its headquarters in Odense, Denmark and a subsidiary in the UK. Riegens Lighting Ltd, based in Braintree in Essex specializes in developing and manufacturing standard and bespoke luminaires with an emphasis on customised, project-specific consumer LED solutions. Operating a flexible approach together with ‘out-of-the-box thinking’ and many years of experience of developing optimum reflector and lighting systems, Riegens Lighting is proud of its heritage when it comes to innovative product development in the lighting sector.

Recent years have seen exciting developments emerge in the field of luminaires utilising LED technology, most notably from OSRAM, a company that has developed a new product called the Osram Orbeos. Th Orbeos utilises new ‘OLED’ technology — an extremely thin light source that emits virtually no heat. Heat emissions are a traditional problem for LEDs and demand specific design requirements when LEDs are used in luminaires, specifically incorporating heat sinks (aluminium on the rear of the LED boards to draw the heat away).

To explore the new design paradigm that the OLED technology offers for luminaires, Osram launched the Osram OLED Artist of the Year competition in 2012. Entries were to be short listed to 10 designs that were to be exhibited at the Lux Live Exhibition in November 2012 to showcase the possibilities and an overall winner selected. Riegens Lighting was invited to submit an entry and one of the designers working on the competition design was Vicky Caulfield. The solution that Riegens came up with was bold and innovative – taking full advantage of the fact that space for the heat sink could be eliminated from the design — opening up new possibilities.

Having produced a digital 3D design of the new luminaire solution, Riegens needed to produce a quality, functional model of the design for the competition showcase at Lux Live. Vicky Caulfield conducted meetings with a couple of UK model / prototype companies that had been recommended to her including Ogle Models & Prototypes. For her though, “Ogle stood out as the best choice as a professional and approachable company. I also liked the fact that everything was manufactured and finished in house and not sent off to other locations for assembly or painting. I was very impressed with the calibre of staff they had working there. They were all obviously experts in their fields and were very approachable when demonstrating their capabilities.”

The model that Riegens required necessitated a range of processes to achieve the very best result in terms of quality and finish. This is where Ogle excels, with a full range of modelling and 3D printing processes in-situ at the Letchworth facility, all operated by highly skilled and experienced people with a passion for what they do.

Vicky was confident that Ogle was the right company to produce a functional prototype of Riegen’s new design, “Seeing some of the previous prototypes produced by Ogle was very reassuring. The level of detail and the intricacy of some of the products I was shown made me confident that they could fulfill this brief with ease.”

Steve Willmott, Ogle’s Technical Director worked with Vicky on the project, providing advice and applying his in-depth expertise for each component of the luminaire. The final solution comprised a combination of 3D printing, for this application, the highly accurate stereolithography (SLA) process was utilized to full effect together with CNC machining, laser cutting and multiple finishes including polishing and painting.

The main base of the luminaire and the housing for the OLED both benefitted from being produced using SLA 3D printing techniques. The rings were machined from acrylic and the stainless steel tube for the spindle was laser cut. As the images show, the rings required multiple finishes, but all three were highly polished and the outer frosted surface was subsequently applied using Osram’s corporate colours with tinted lacquers. The working OLED and its driver were supplied (to all the competitors) by Osram.

In the final model, the rings can be manually positioned so that the consumer can decide where the lit colours and shadows fall and the finishes ensure a soft light on the outside of the rings with a harder light from the polished edges. The colour changes from the straight clear through bright white to the tint colour depending on the viewing angle, giving the effect of an ever-changing look without any automatically moving parts.

Vicky was extremely happy with how the project progressed and with the final result: “I couldn’t fault Ogle from start to finish on this project. The final prototype was so well made. It was exactly as I had imagined it and the quality was faultless. 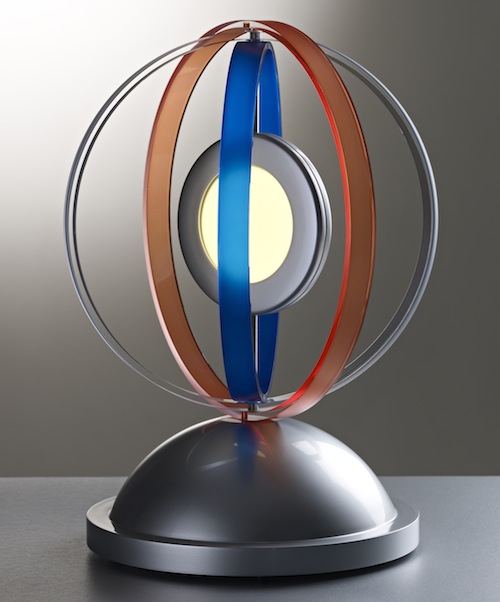