Thanks to 3DZ, one of Europe’s leading 3D Systems distribution groups, (covering Italy and many regions of Southern Europe), I had a chance to use and test a Cube 3 3D printer for a few weeks. The first impression is that, for engineering and part quality, this is, or perhaps we should say “was”, the best consumer desktop 3D printer (with dual jets) on the market.

The reason why I suspect that 3D Systems has not sold enough of them, other than the fact that the consumer 3D printing market is still a “Chimera”, is that it was too much of a closed platform. On one hand this means that it is easier to use if you have no idea what you are doing; on the other it also means that it stifles one’s creativity. That, at this momenti in time, is a weakness for a 3D printer. 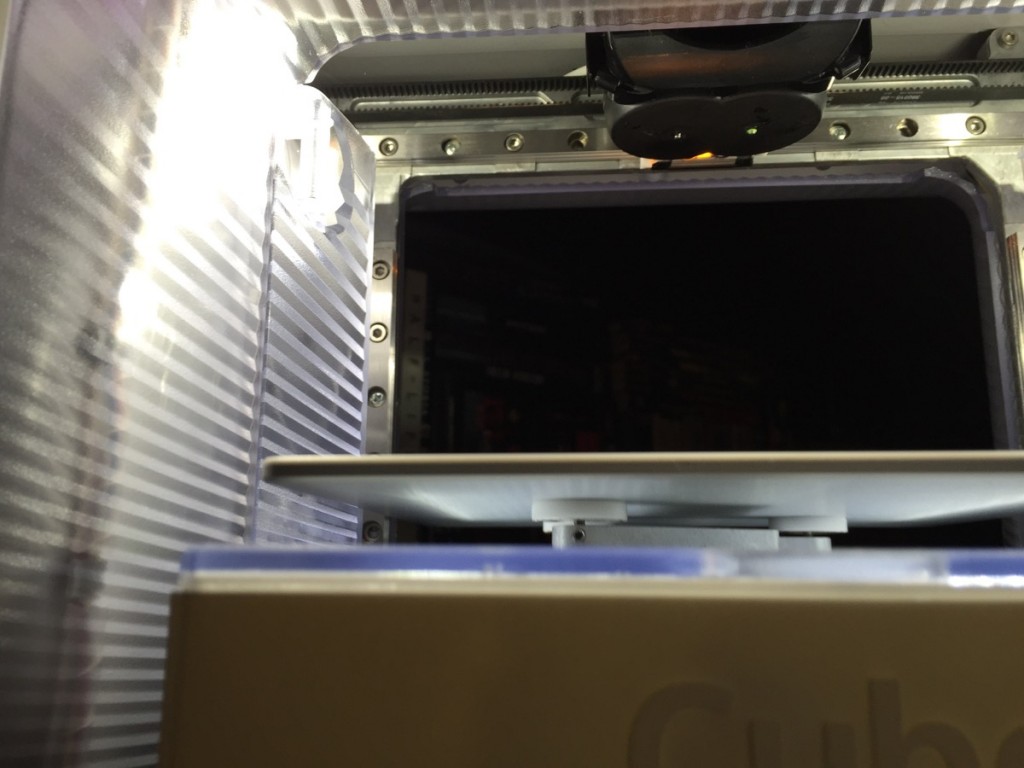 On the other hand if you are someone who just needs to 3D print PLA models of architectural and engineering projects, or if you simply want to 3D print basic toys and accessories, it did not get much easier and more efficient than this. The base price, less than €1,000, is certainly not prohibitive however the cost of the materials cartridges (more on them later), €40 per about half a Kg, is. However if you consider that this machine rarely misprints, it is well within most prosumers’ budgets. For its main target of consumers, the only one that could have granted the numbers required by the corporate world and Wall Street, though, it was still too much). 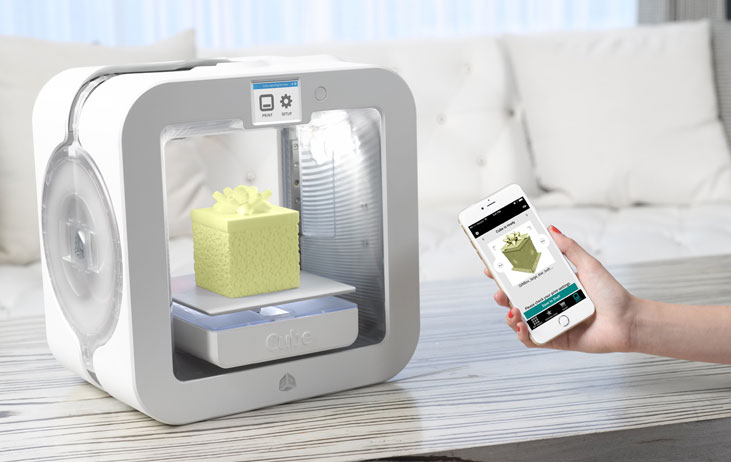 First of all the Cube 3D was beautifully designed and, although its shape resembles that of the BEETHEFIRST very closely, it is certainly a different machine.

It comes in a rather standard, consumer electronics product cardboard box, which makes it look like an everyday necessity, almost like a microwave oven or a desktop computer. The truth is that very few of our modern consumer electronics products come in large cardboard boxes any longer. This made the Cube 3 seem like the first in a new generation of digital products that will bring “physical” back, after we condensed all our entertainment in the virtual space. At the same time it made it seem like a… microwave oven or, worse, a VCR. 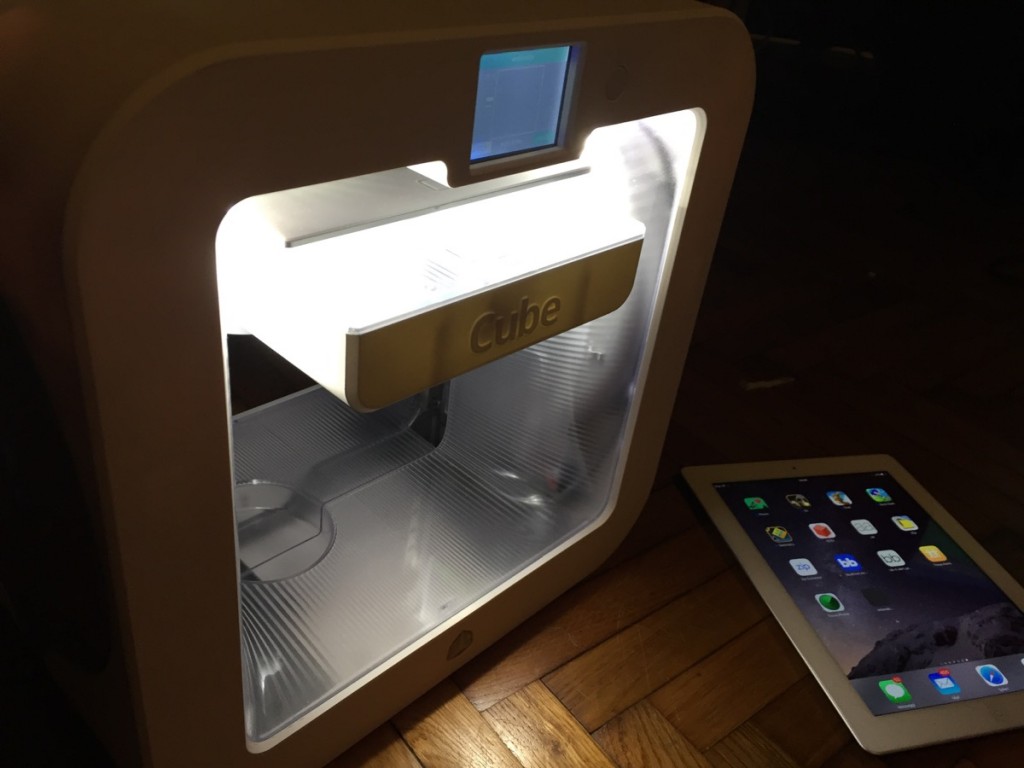 Printing the first object takes just the necessary time to plug it in, turn it on select the preloaded STL models. That equals out to five minutes at most. Printing the first original product with it, on the other hand, takes considerably longer. If you want to exploit its full potential you will have to connect it to you wifi network, which is a great option. Too bad the onboard system to input the password is a bit time consuming, as you need to scroll through every single letter on the small color touch screen. 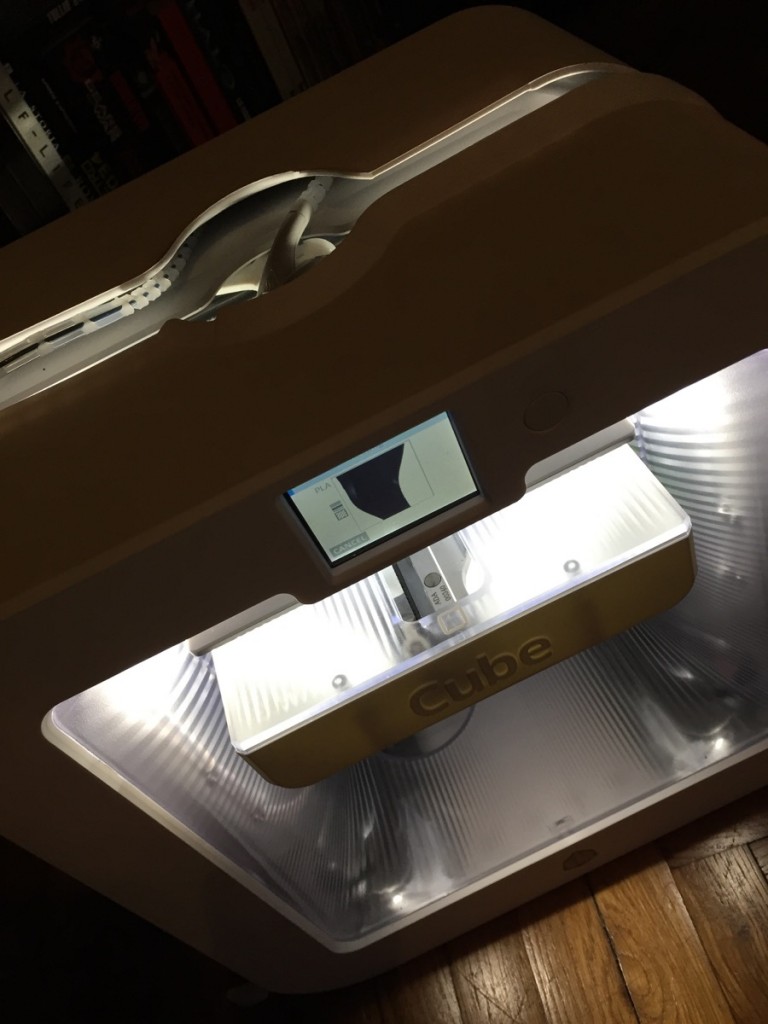 After that, you can upload a model from a USB card but the system was built to offer a broader range of Apple-inspired possibilities. If you want to exploit them all, you will register a new account on the Cubify network and use you profile page to select items to print or to upload your own STL’s. At this point you will be able to do all the slicing automatically and even start the 3D print remotely from the iOS/Android Cubify app on your mobile phone, which works together with the online App on your computer’s browser. 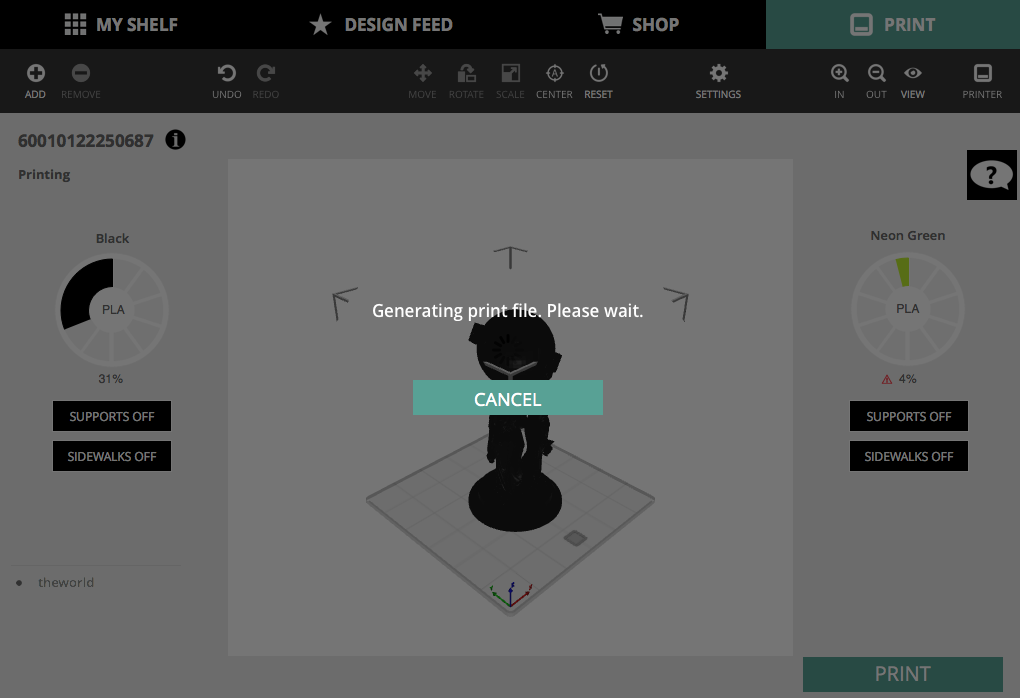 All these features would be great if a home 3D printer could really be used for thousands of useful applications, like an iPhone can. However at this point in time, a 3D printer – especially one that only uses PLA – still has very limited possibilities. It should be as open a platform as possible to attract more users. Otherwise it just comes off as a cool novelty, that risks ending up sitting on a shelf because you don’t want to spend any more money on materials.

That is the second issue with the Cube. Other companies targeting the consumer market, such as Zortrax and XYZPrinting (and even Formlabs with the resins), have also begun offering closed and proprietary materials that are made to go with their 3D printers. However they have done so at prices that are not significantly higher than third party materials and in most cases they leave the possibility of using third party materials open. With the Cube 3, 3D Systems chose a different path: it created the coolest and most functional closed materials system I have ever seen in a low-cost 3D printer (much better than the first cartridges for the Cube Pro), but prices remain somewhat high.

It is just a matter of simple math: how many GoPro and iPhone accessories, drone and robot parts, small architectural designs, cups, vases, toys and fashion accessories can you possibly print with it? If your answer is a lot, than the reliability of this machine would easily justify the higher material prices.

If you, on the other hand, do not yet know what to do with a 3D printer, then, having a closed material system, limits your possibilities for exploration. At this point in time, 3D printing is still a lot about experimenting and most users are more willing to spend some extra time on working out functionality while limiting costs. However, when it comes to printing quality, the fact that this is an extremely closed and well engineered system, assures an excellent and repeatable quality of the prints. The working volume is 15.25 x 15.25 x 15.25 cm and I used it almost entirely to 3D print a 15 cm tall geometrical vase (which I downloaded from the Cubify network) to perfection. 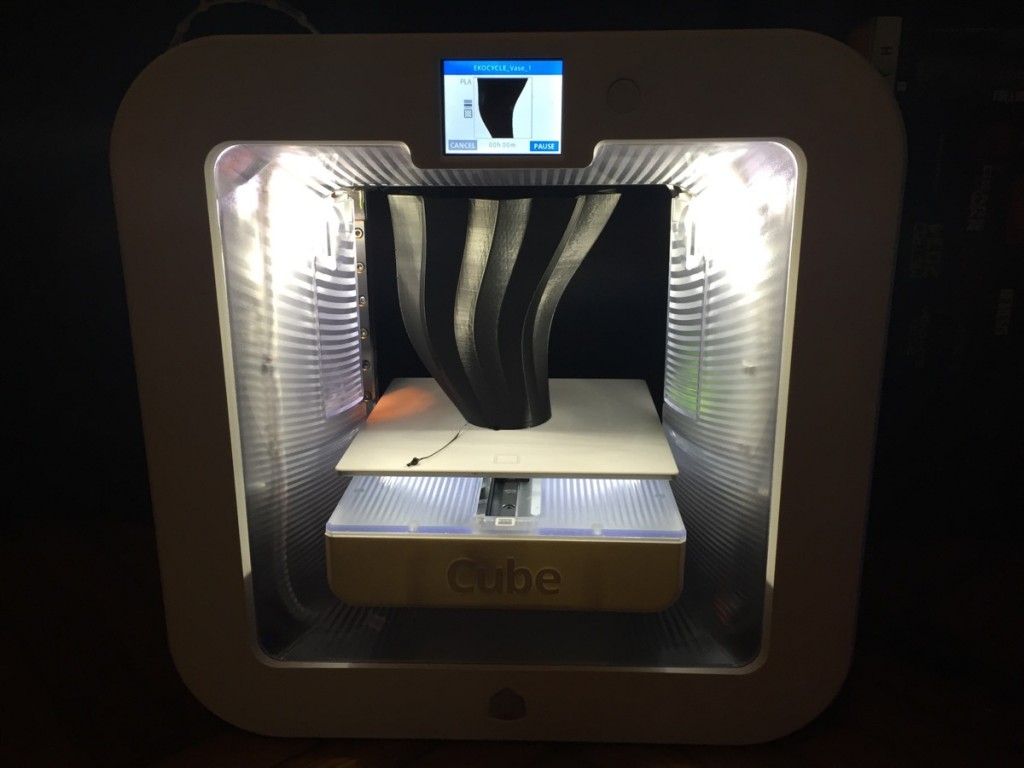 The magnetic plate (also similar to the BEETHEFIRST’s) is a great option, which makes it easier to remove the prints. However the best part is certainly the dual jet extrusion systems. Together with the cartridges it makes it virtually impossible for the materials to ever get stuck. It also tells you exactly what percentage of the materials is left in the cartridge so you never have to risk running out and you always know how much time is left. All you have to do is select which “jet” you want to use. Not to mention that it is so light and compact that you can take it anywhere, anytime, even more easily than with the Ultimaker 2 Go and other small size 3D printers. 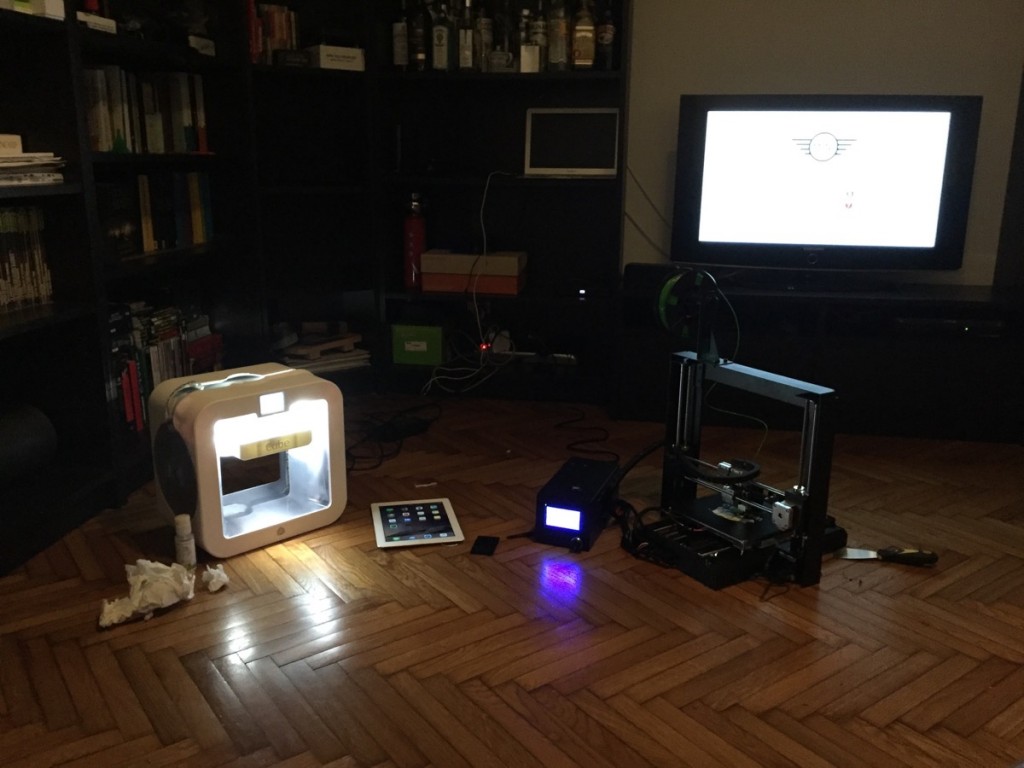 If all you have to make is a PLA part, it really does not get much easier than this. Its time may not have come yet but it will. January’s CES in Las Vegas, where 3D Systems is rumored to be planning a very large participation, is going to see a huge number of 3D printers being presented and launched. After the initial and exaggerated hype, consumers are now beginning to really embrace 3D printing. Cube 3 or not.