The Obama Administration announced in March 2012 about a new US innovation initiate called National Network for Manufacturing Innovation (NNMI). It aims to ensure manufacturing industry growth by developing 15 centers of excellence, as they are called, which combine industries together in order to solve problems related to manufacturing in a new innovative way and to provide the US manufacturers access to the latest technologies.

The first center of excellence will be called National Additive Manufacturing Institute (NAMII), which has been granted a funding of $70 million, of which $30 million is coming from NNMI and $40 million from private sector. 3D Printing technology was selected as one of the centers as it is seen to be a key element for US future competitiveness.

Companies in the 3D printing industry, such as Stratasys, 3D Systems and AutoDesk have been selected as strategic partners of this venture. The purpose of the partnership is to increase the US industrial competitiveness through bringing more manufacturing back to the US soil, creating new jobs and increasing exports.

The partnership was warmly embraced at 3D Systems, who were the first movers in 3D printing industry over 25 years ago. “We are pleased to be part of a real visionary government initiative powered by 3D printing to increase our national competitiveness,” said Cathy Lewis, Vice President of Global Marketing, 3D Systems. “We are particularly excited to support job creation and entrepreneurship by working with the National Network for Manufacturing Innovation to make localized manufacturing a reality.”

The state of US economy is currently weak and this partnership is surely aiming to lower the US dependency on Chinese and other low cost manufacturing. While it may create new jobs as a bonus, the larger benefits are attached to the independence over manufacturing and increased exports.

It will be very interesting to see how it all comes together and what the results are. Looking at the state of the Western World and especially the problematic economic state in Europe, something like this could well be the answer. 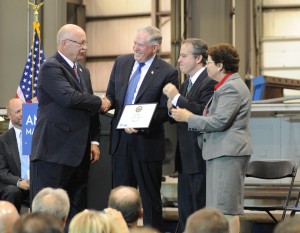