Watching a huge power station loom into view may look impressive but apart from utilising a great deal of natural resources they are also wildly inefficient. A large power station will typically only convert in the region of 40% of the energy produced into electrical power. Most of this energy is lost through wasted heat via cooling systems into the atmosphere.

The Fraunhofer institute for Material and Beam Technology IWS in Dresden, Germany, aims to change all that by utilising an area of physics known as thermoelectrics to tap into a process to generate energy from differences in temperature.

The electron transfer process by which the power is generated and the thermoelectric generator (THG) itself is well understood, but they are expensive, require intensive manual labour and are environmentally unfriendly to produce. Fraunhofer’s latest 3P printing technologies will reportedly change all that and revolutionise this 200 year old physical effect. 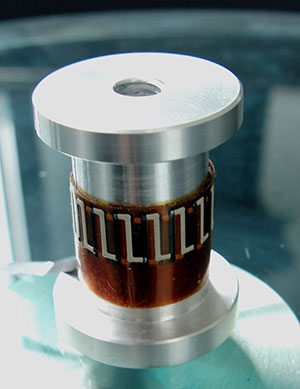 Dr. Aljoscha Roch  and colleagues have succeeded in printing a thermoelectrically active polymer paste in 20-30 micrometer layers, effectively creating cost-effective miniaturised generators over a large surface area. And because the 3D printed non-toxic polymers are also very flexible, they can be mounted on concave surfaces. In fact the IWS researchers are demonstrating the 3D printed TEG in a cooling tower model at the Hannover trade fair.

Indeed, power stations are not the only applications for these technological developments; Dr Roch envisions a much bigger market: “In principle waste heat is produced through the operation of every technical installation. With TEG fitted on industrial production lines, in sewerage systems, at large computer centres or on any type of exhaust air system; very large and hitherto unused sources of energy could be developed”

This may be the first time that vapourware has the potential to improve our lives!