Camtek Ltd. (CAMT) is launching the first commercial 3D printer for the PCB (Printed Circuit Board) industry this year. The company announced this development in a press release stating: “As a future growth engine, in addition to the existing products lines, the Company will focus its activity in the field of digital 3D printing for the printed circuit board industry.” As discussed in last month’s 2013 year-end conference call, Camtek’s new $300,000 “GreenJet” inkjet-based 3D printer has been delivered to the first customer and is in the final stage of testing with full commercialization anticipated in the second half of this year. With the competitive advantages the printer delivers, the launch could be a game-changer for the company as well as the PCB industry.

Camtek Ltd manufactures and markets computerized systems that optically inspect electronic components for defects caused during manufacturing. The $120 million market cap company has 480 employees, a balance sheet with $ 22.5 million cash and equivalents, and a current ratio of 3. Camtek Ltd. is based in Israel, with offices in the U.S. and Europe in addition to a strong presence throughout the Asia-Pacific region.

Highlights of the Full Year 2013

Camtek’s $300,000 GreenJet printer is an inkjet-based 3D printer designed for the deposition of solder mask on PCBs and offers manufacturers a high-performance solution with a wide range of cost-effective and technological benefits. The GreenJet printer is reported to deliver savings in labour, cycle time, electrical costs and space.

Moreover, GreenJet printers directly address a critical, costly and frequent complication during PCB manufacturing process: misalignment. As PCBs become increasingly crowded in order to fit more electrical components with more links on smaller boards, perfect alignment is essential. I believe the ability of the GreenJet printer to minimize alignment issues and reduce the 4-step solder mask deposition process to a 1-step process in addition to cost savings and shorter cycle times will result in strong demand from PCB manufacturers.

The PCB industry is forecast at an 8% compound annual growth rate, and to reach $93.9 billion by 2017.  This enormous market is highly competitive and Camtek’s GreenJet printer is entering the space with a novel product that delivers PCB manufacturers the competitive advantages noted above.

In addition to machine sales Camtek will generate recurring revenue with their proprietary hybrid ink, tailored to meet the demanding requirements of the PCB industry.

Triple bottom reversals and 10 day moving average breaks are two of the more frequently used bullish technical indicators, and that’s in no small part because they are typically reliable.

Many experts agree that stock trading in specific companies and in the stock market overall tends to be forward-looking by about 6 months. Taking that time frame into consideration with Camtek’s scheduled commercialization of GreenJet printers in the second half of this year, I believe the lows of 2014 have been put into place and that the stock will trade higher from here. 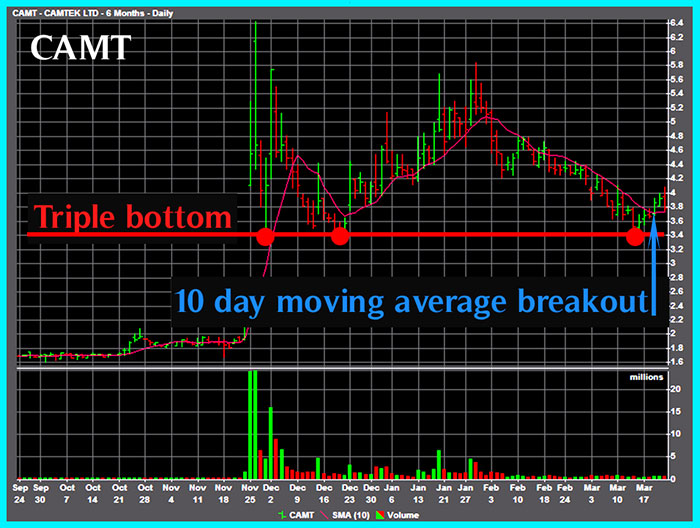 With a strong balance sheet, strong revenue growth forecast, positive cash flow from operations and the commercial launch of the GreenJet printer this year, I believe shares are heavily undervalued at present.  Analyst estimates for .10/share in earnings this year, jumping to .40/share next year appear well within reason and should drive CAMT shares higher.

Disclosure: I am long shares of  Camtek Ltd.  I have not been paid by any company or third-party for this article.