The QB50 project is about to launch 3D printed plastic satellites into the thermosphere. It’s part of the most comprehensive study ever produced of the solar flares and storms that take place when the Northern Lights dance across the sky.

To date, 48 universities and institutions have pitched in and will take part in the study that should give us a much deeper understanding of the thermosphere with the help of 50 separate CubeSat satellites.

“The region is poorly understood and hard to measure,” said Andrew Dempster, director of the Australian Center for Space Engineering Research at the University of New South Wales.

“It’s the interface between our planet and space. It’s where the ultraviolet and X-ray radiation from the Sun collides with Earth. That’s what generates auroras and potential hazard that can affect power grids, communications and GPS receivers.” 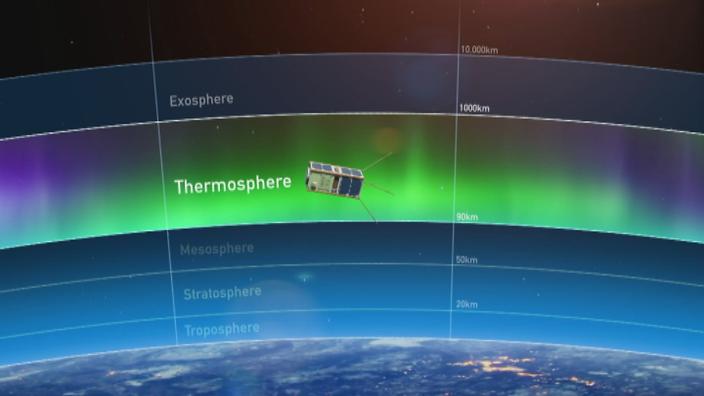 The Northern Lights are a wonderful show for those on Earth, but each light is the result of a violent episode in the thermosphere that can have far-reaching consequences.

Blackouts and even a loss of communication with planes can occur when the storms strike. They can even affect our weather. Knowing how they work and when they are coming can help us deal with them.

“You’ve got vacuum, you’ve got wild temperature swings, but you also have a lot of radiation, cosmic rays, solar radiation,” said Dr. Elias Aboutanios. “These can upset electronics. So this will allow us to recover from these errors.”

Not all of the satellites will be 3D printed and they each have specific jobs and parameters to test. Some will test the thermosphere’s atomic composition, others will measure the density and temperature of particles that can affect radio waves below.

RAMSES (Rapid Manufacture of Space Exposed Structures) has been printed from thermoplastic, which seems brave. The whole purpose of the satellite is to see how it survives the rigours of space and the particularly unwelcome environment that waits for it in the thermosphere.

If it survives, then it will be a big step forward and it will give scientists the confidence to use ABS plastics in the future. Satellites have to be over-engineered at the moment because the cost of transporting them to the ISS and then launching them into the thermosphere is immense.

If a space agency or commercial enterprise took a risk on thermoplastic and it simply burned up then it could be a serious blow, but if it works then it could slash the cost of future satellite production. That means we can potentially produce more satellites and have a number of them in the atmosphere on each and every study where just one bears the load right now.

So testing it now, as part of a wider experiment, is a real bonus for the scientific community.

The 2kg satellites will orbit and collect date for up to 12 months, if they last that long. The first leg of their journey starts with a launch on Wallops Island, Virginia, on December 30th. When they arrive at the ISS, they will be sent into orbit by the NanoRacks CubeSat launcher.