A defective turbine wheel meant that a small hospital in Ethiopia was no longer able to warrant the supply of its electricity. And it did not have enough money to replace the wheel. Thanks to the joint social engagement of several German and Swiss technology companies, the problem was solved quickly and without much bureaucracy, and not least with the assistance of 3D printing technology from voxeljet, the manufacturer of big, industrial 3D printers.

The production of a new turbine wheel for the small clinic in Walga, Ethiopia, was led by Swiss-based Turbal AG, a medium-sized family-owned company with 50 years of experience in turbine and equipment construction.

The main problem facing the clinic was that the conventional production of wheels is an extremely cumbersome, labour-intensive and expensive process because it requires the manual production of several sand core segments and complicated undercuts. Which is where voxeljet’s 3D printing technology came into its own because it offers rapid and cost-effective solution for this type of application. Dr. Ingo Ederer, CEO of voxeljet technology GmbH explained: “Once we heard about the problem, we immediately decided to help. Our 3D print technology is virtually predestined for cases such as these. The state-of-the-art printing equipment at our service centre allows for the economical and tool-less production of high-quality sand moulds and cores for metal casting based on CAD data, even for a batch size of one. Producing a sand core for the wheel is a routine undertaking for us.” 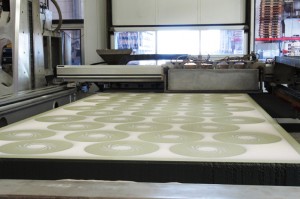 Once the required CAD data for the wheel was available, voxeljet started with the process of producing the flow-carrying interior for the Francis wheel. In this context, the monoblock sand core, which is created on a fully automated basis using 3D printing, replaces many manually produced core segments that are strung together. In contrast to the conventional manufacture of moulds, in which the production of model plates or core boxes alone can take several weeks, 3D printing makes it possible to print smaller sand moulds in as little as a few hours.

The 250 millimetre mould for the wheel was built in layers over a period of almost five hours. Precision is a prerequisite in this process – an accuracy of 0.2 millimetres is now achievable with voxeljet’s large-format printers, which can produce moulds of particle material in dimensions of up to 4 x 2 x 1 metres. 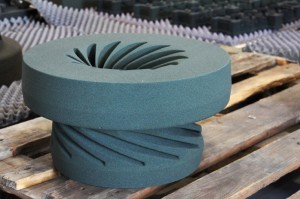 In this case, 3D printing resulted in higher component accuracy, a significant reduction in subsequent machining as well as an excellent surface quality and contour precision.

After the printing process was completed, the mould only had to be unpacked and cleaned of excess sand. The simple and easy handling of the moulds meant that they can be easily transported to the foundry. Due to their low binder content of 1.2 percent and a pressure of 220N/cm², the sand cores are comparable to those derived from conventional series production. The moulds could then be used immediately for further processing ready for casting. 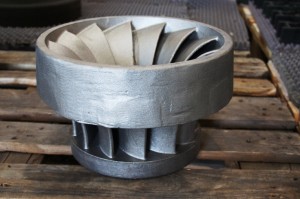 “In this case, we decided on a combination of a 3D-printed sand core for the complicated turbine geometry and a conventionally produced exterior mould. This meant that we use the advantage of 3D printing where it pays off the most – for the production of the complicated interior. Instead of many individual core segments which are strung together, the mono sand core impresses with higher component accuracy, smaller tolerances and fewer cleaning requirements, and does away with the need for many core separation devices”, commented Dr. Ederer. In most cases, it pays to produce both the interior as well as the exterior mould using the 3D printing method. In the final analysis, it is a question of unit numbers and individual circumstances that will determine how the exterior mould should be produced.

The Wolfensberger steel foundry, which is increasingly relying on voxeljet sand moulds for the production of complex cast part prototypes, was again very impressed by the quality of the 3D prints for this project. The cast also impressed Turbal AG. This ‘help for self-help’ project has restored the production of electricity at the clinic in Ethiopia. “In our opinion, non-bureaucratic direct-help projects such as these are very effective and also ensure that help goes exactly where it is needed. voxeljet was pleased to be able to make a meaningful contribution to a meaningful project'”, concluded Dr. Ederer. 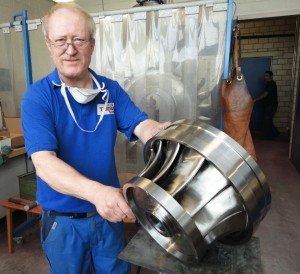 Participants of this direct-help project were:  Swiss-based Turbal AG; German based, voxeljet technology; Solar and heat technology specialist H. Lenz AG from Niederuzwil, as well as the steel foundry Wolfensberger AG from Bauma.

A video overview of the voxeljet process in action for this project can be viewed below: