The latest financial results for Stratasys are out and on the surface, things are fairly unremarkable. So no news, good news? Not really, the early market response to the financial statements has sent the share price plummeting.

Headline figures for the quarter ended September 2019 show net sales revenue down from a 2018 comparative of $162 million to $157 million. Gross profit moved downwards from $83 million to $80 million and the net loss figure increased to $7 million from $745k.

Yet, while revenue is flat, Stratasys has also downgraded its full-year revenue guidance. A shift from a range between $670 million to $700 million to the new spread of $640 million to $655 million is partly what has spooked traders with Stratasys stock down 12%.

Furthermore, five-year revenue trend data at Stratasys does not paint a rosy picture. Again, there is no catastrophic event evident warranting a mass exodus from any stock position. Instead, the five-year trend of Q3 revenue shows a marginal decrease in both revenues from products and services. 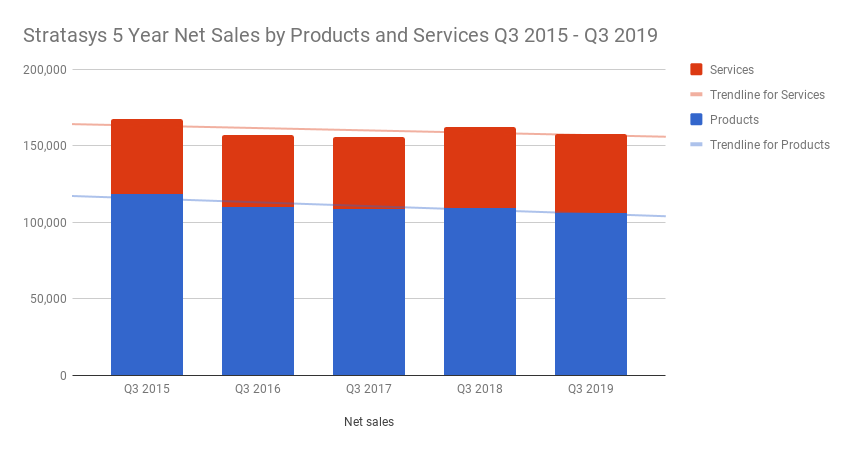 Cash and equivalents have shifted from a period of continual increases to a marginal decrease in this quarter with a $1.8 million drop compared to Q3 2018. While the fall is immaterial, if this becomes a trend there will be a reason to be concerned.

CFO, Lilach Payorski noted that Stratasys had used $8.6 million of cash from operations during the third quarter, versus $5.0 million of cash generated in the comparative period. This was, “primarily due to proactive steps to increase inventory levels in order to improve fulfillment time and support product demand as well as to prepare for new product launches in 2020.”

During a call with analysts and investors today Stratasys provided further granularity on the revenue figures.

“Significant” product announcements on the horizon

While CEO Jaglom was keen to highlight, “specific strength in high-end FDM and PolyJet systems, our F123 Series, and our target verticals of automotive and aerospace,” most notable here is the nine percent year on year decrease in System revenue. Decreases in machine sales typically are a leading indicator of a fall in other revenue streams in future periods.

Wrapping up the scripted section of the call the briefest update on the search for a CEO was given with Jaglom saying the search,  “is progressing, and I look forward to completing the process.”

Looking to the next decade, Stratasys will “make additional significant product announcements in 2020.”

Stratasys would not be drawn on the details on what formnext 2019 will hold for the company. 3D Printing Industry will be at next week’s show to bring you the latest news.

You can keep up with all the additive manufacturing news by subscribing to the free 3D Printing Industry newsletter, following us on Twitter and liking us on Facebook.

0 0 0 0
More on this topicHP announces new business model, network expansion and alliances for formnext 2019 - what does it mean for the 3D printing industry?
More on this topicSiemens acquires Atlas 3D, optimizes metal additive manufacturing processes